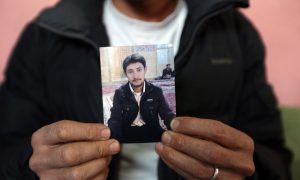 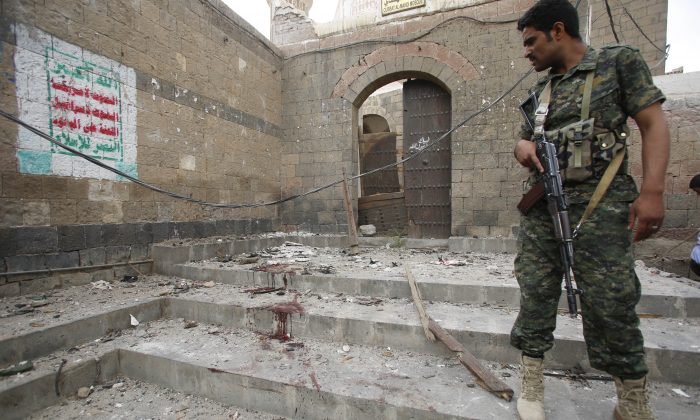 A Shiite Houthi rebel, wearing an army uniform stands guard at the site of an explosion near the old city of Sanaa, Yemen, Saturday, June 20, 2015. (AP Photo/Hani Mohammed)
Middle East

Mohammed al-Faili, 32, told The Associated Press that his 70 year-old father was killed in what appeared to be a bombing attack. Two of his brothers were also wounded by the explosion. Speaking to the AP by telephone, he said he was not at the mosque at the time of the explosion but was heading to the morgue to identify his father’s body.

The official Kuwait News Agency reported that an explosion struck the Imam Sadiq Mosque, which is located in the neighborhood of al-Sawabir, a residential and shopping district of Kuwait City. The agency confirmed that there were multiple casualties and injuries, but did provide any figures.

Paramedics at the mosque say at least two people were killed. Police formed a cordon around the mosque’s complex immediately after the explosion, banning people from entering or gathering near the area. Ambulances could be seen ferrying the wounded from the site.

Abdullah al-Saffar, who was at the mosque, said the explosion took place just after midday Friday prayers.

There was no immediate claim of responsibility for what appears to be a bombing that targeted the mosque. The extremist ISIS group, which regards Shiite Muslims as heretics, has claimed responsibility for bombings at two different Shiite mosques in neighboring Saudi Arabia in recent weeks.

Friday midday prayers are typically the most crowded of the week, and attendance increases during the holy Muslim month of Ramadan, which started last week.