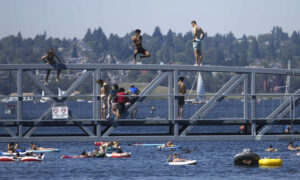 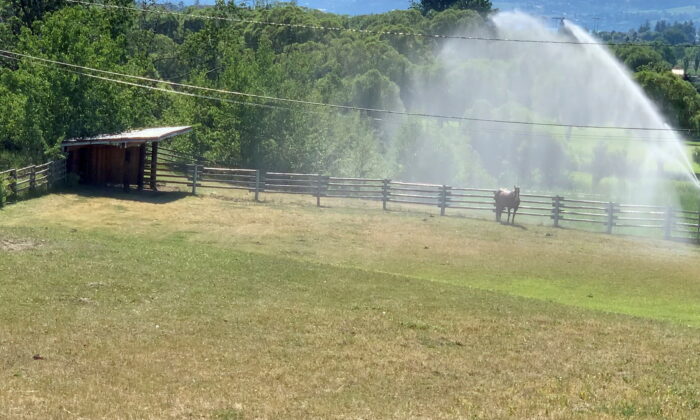 Sprinklers spray water on a horse amid a heatwave in Kelowna, British Columbia, Canada, on June 27, 2021. (Twitter @Canadianbyluck via Reuters)
Canada

WINNIPEG, Manitoba—Canada’s deadly heatwave, the most severe on record, is moderating slightly, but still looks this week to erase high-temperature marks set decades ago, a government climatologist said on Wednesday.

At least 233 people died in the Pacific coast province of British Columbia between Friday and Monday, about 100 more than the average for a four-day period, the B.C. Coroners Service said.

The heatwave has scorched crops across the Prairies, where farmers grow much of the world’s wheat and canola, driven up natural gas prices in the fourth-largest global producer, and increased the risks of wildfires.

Lytton, a town in central British Columbia, this week broke Canada’s all-time hottest temperature record three times. It now stands at 49.6°C (121.28°F) as of Tuesday. The previous high in Canada, which is widely known for its brutal winters, was 45°C (113°F), set in Saskatchewan in 1937.

The heat dome stretching from California to Canada’s northern territories is weakening as it moves east, but is still intense enough to set records from Alberta to Manitoba, said David Phillips, senior climatologist at Environment and Climate Change Canada, a government agency.

“In some of these places, their records are being annihilated,” Phillips said. “It really is spectacular, unprecedented for us.”

Most of Alberta and large parts of British Columbia and Saskatchewan are at extreme risk of wildfires, according to Natural Resources Canada’s fire weather map.

Fire is likely to spread across Western Canada in the next week, and the summer could produce an active fire season, said Mike Flannigan, professor of wildland fire at the University of Alberta.

“All the ingredients are there,” he said. “It’s a powder keg just looking for a spark.”

Canola futures soared this week as the heatwave looked to shrink harvest prospects for the oilseed, which is used to produce vegetable oil. Hot temperatures forecast in coming weeks may cause the crop’s flowers to drop prematurely, creating the potential for reduced farm yields, said Shane Paterson, director of trading and transportation at Paterson Grain.

Prairie farmers are already coping with one of the worst droughts in years.

Migrant workers on fruit farms are particularly vulnerable, said advocate Byron Cruz of Sanctuary Health, an organization that helps migrants. Some working in B.C. greenhouses, where temperatures can be six degrees warmer than outside, have said they felt faint in the stifling heat, but are unwilling to take breaks to cool off, fearing they will not be rehired, Cruz said.

Construction workers with precarious immigration status who are unwilling to work in the heat are guaranteed to lose income, he said.

The heatwave is also driving up demand for natural gas, boosting June spot prices in Alberta to a seven-year high, according to Scotiabank. Natural gas is used to produce electricity.