Dead Whale Found With 85 Pounds of Plastic Bags in Its Stomach: Reports 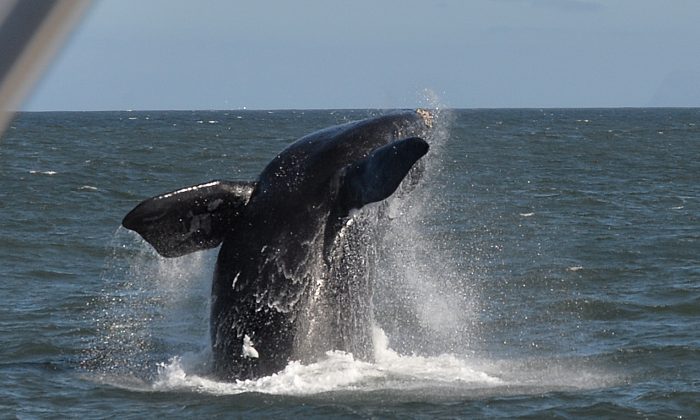 A dead whale was discovered with more than 85 pounds of plastic bags in its stomach, according to officials.

“I was not prepared for the amount of plastic. 40 kilos roughly of rice sacks, grocery bags, banana plantation bags, and general plastic bags. Sixteen rice sacks total. It was so big, the plastic was beginning calcification,” Marine biologist Darrell Blatchley told CNN over the weekend.

He said it was a male Culver’s Beaked Whale, which was vomiting blood when it died in Mabini, Philippines.

“It’s disgusting. Action must be taken by the government against those who continue to treat the waterways and ocean as dumpsters.”

Whales, Blatchley said, don’t drink water from the ocean and get fresh water from the food they eat. The plastic caused the whale to die of dehydration and starvation.

“This whale had the most plastic we have ever seen in a whale. It’s disgusting,” he said.

He called on the Philippine government and Filipinos to not use single-use plastic items.

It was an unusually large amount of plastic even by the grim standards of what is a common threat to marine wildlife.

“The Philippine people are a proud people, sadly it’s not in being clean or taking care of the environment. In the last 10 years we have recovered 61 whales and dolphins, of which 57 have died due to fishing nets, dynamite fishing, and plastic garbage. Four were pregnant. This cannot continue. The Philippines needs to change from the children up or nothing will be left,” Blatchley told CNN.

The Ocean Conservancy said that single-use plastic items are common in Southeast Asia and China.

The organization said in 2017 that China, Indonesia, the Philippines, Thailand, and Vietnam have been dumping more plastic into the world’s oceans that the rest of the world combined.

“We also now have research to suggest that the majority of plastic enters the ocean from a small geographic area, and that over half comes from just five rapidly growing economies—China, Indonesia, the Philippines, Thailand, and Vietnam. These countries have recently benefited from significant increases in GDP, reduced poverty, and improved quality of life. However, increasing economic power has also generated exploding demand for consumer products that has not yet been met with a commensurate waste-management infrastructure,” it said in a 2018 report.

In June of 2018, a pilot whale was found dead in Thailand after swallowing 80 plastic bags.

Scientists believe tides washed the whale onto the shore and into the forest.

Several weeks ago, a dead humpback whale was discovered in a mangrove forest in Brazil with no obvious signs as to how it got there.

Officials think it died several days before it was discovered.

Renata Emin, the institute’s project leader, said, “We’re still not sure how it landed here, but we’re guessing that the creature was floating close to the shore and the tide, which has been pretty considerable over the past few days, picked it up and threw it inland, into the mangrove,” according to The Independent.

“Along with this astonishing feat, we are baffled as to what a humpback whale is doing on the north coast of Brazil during February because this is a very unusual occurrence.”

Oceanographer Maura Sousa said the whale was found near the mouth of the Amazon River.

“During this season, the tide normally rises twice a day to almost 4 meters (13 feet) and floods the mangrove forest, bringing lots of trash, including trash from ships from a lot of places in the world,” Sousa told CNN. “This explains why an inflated carcass, due to the gases of the decomposition, was dragged into the mangrove forest,” she said.