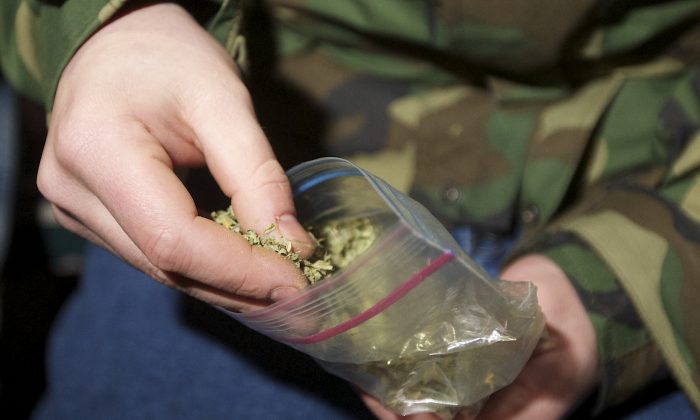 Washington state and Colorado may have legalized marijuana for recreational use in November last year, but the United States Drug Enforcement Agency doesn’t acknowledge these state laws and is continuing to enforce the federal law that makes the drug illegal.

In a series of letters obtained by the Seattle Post Intelligencer (one embedded below), agency officials make it clear that distributors of marijuana are, despite state laws, always in danger of being raided by the agency.

“This letter serves as a notice to you that, under United States law, the sale and distribution of marijuana is illegal and subjec tot criminal prosecution and civil enforcement actions,” wrote Matthew Barnes, special agent in charge of the agency’s Seattle Field Division, to a medial marijuana store owner in April.

“Property involved in such operations, including real property, is subject to seizure by, and forfeiture to the United States.”

Drug Enforcement Agency (DEA) spokeswoman added in an email to the Intelligencer that “These storefronts are in violation of state and federal law.  … We will send out additional letters as we identify locations.”

“This action is part of on-going comprehensive strategy to combat drug trafficking in coordination with five judicial districts in our area of responsibility,” she said.

41 of these letters had been sent through June 2.

In another letter, to someone who had rented a storefront and planned to start selling marijuana, or cannabis, the DEA sent a letter saying that “Please take note that the federal drug trafficking laws operate independently of Washington state controlled substances laws.”

During a July 24 raids of multiple medical marijauana dispensaries in Seattle, Tacoma, and Olympia, store workers and owners said they had guns stuck in their faces and stocks of their stores cleared out.

Casey Lee, who owns the collective, said that he kept asking what was going on.

“I kept saying, ‘We don’t feel like we’ve done anything wrong. Why are you guys here?’ And they said, ‘Well, you guys are state legal, but you are still not federally legal,’ that’s all they could tell me.”

DEA agents told Lee that the raids were part of a two-year investigation, though they didn’t elaborate.

Gil Kerlikowske, the United States “drug czar,” or director of the Office of National Drug Control Policy, told the Canadian magazine Maclean’s in a February interview that despite Washington state and Colorado legalizing marijuana, the government will go after stores distributing the cannabis.

“You’ll continue to see enforcement against distributors and large-scale growers as the Justice Department has outlined,” he said. “They will use their limited resources on those groups and not on going after individual users.”

President Barack Obama has gone back and forth on the issue, at one point during his first campaign promising to change the federal laws, and after becoming president saying the federal laws wouldn’t change but it would up to the states to make their own laws. He told ABC in December 2012 that recreational users of marijuana in states that have legalized the substance shouldn’t be “top priority” of federal law enforcement officials.

“We’ve got bigger fish to fry,” he said, referring to Colorado and Washington recreational users. “It would not make sense for us to see a top priority as going after recreational users in states that have determined that it’s legal.”

He said he doesn’t support widespread legalization of marijuana while acknowledging there’s a problem between the current difference in state and federal laws. “This is a tough problem, because Congress has not yet changed the law,” Obama said. “I head up the executive branch; we’re supposed to be carrying out laws. And so what we’re going to need to have is a conversation about, How do you reconcile a federal law that still says marijuana is a federal offense and state laws that say that it’s legal?”

The White House website states that while there have been “increasing efforts to legalize marijuana, the Obama administration has consistently reiterated its firm opposition to any form of drug legalization.”

“Together with federal partners and state and local officials, the Office of National Drug Control Policy is working to reduce the use of marijuana and other illicit drugs,” it adds.

Officials from both Washington and Colorado met earlier this year with Attorney General Eric Holder, and tried to gauge how the new laws would be treated by the federal government. But they didn’t find out much.

“They listened and did not communicate back,” Carolyn Tyler, a spokeswoman for the Colorado Attorney General, told Talking Points Memo. Officials from both states said they intend to follow state laws over federal ones. “We intend to move forward with supporting the will of the people,” said Washington Attorney General Bob Ferguson, who added that he told Holder that they wanted to work together.

“I conveyed to him that we wished to avoid a legal fight, but that my office would be ready for litigation if that’s the direction the federal government chooses to go,” he said.

Maclean’s asked Kerlikowske, the director of the Office of National Drug Control Policy, why marijuana couldn’t be legalized and abuse of the drug be treated separately as a medical issue, like alcohol abuse is treated.

“We arrest about 2.4 million people in this country a year for alcohol,” he said. “We arrest less than 700,000 people for marijuana—and for all drugs, only 1.3 million. Alcohol is perfectly legal. So making drugs available without any sanction would only lead to more abuse.”

The publication also asked him about a report by Canada’s Liberal party saying that thousands of Canadians could find jobs related to marijuana and pot tourism, mostly as Americans would come to the country to get pot. “What do you think of that?”

“Well, I think of the experience of the Netherlands—they’ve had marijuana cafés for decades and in the last few years the government decided to close hundreds,” said Kerlikowske. “One of the primary reasons they cite is marijuana tourism—people coming in from Germany, Belgium and other places have caused crime problems and other difficulties.”