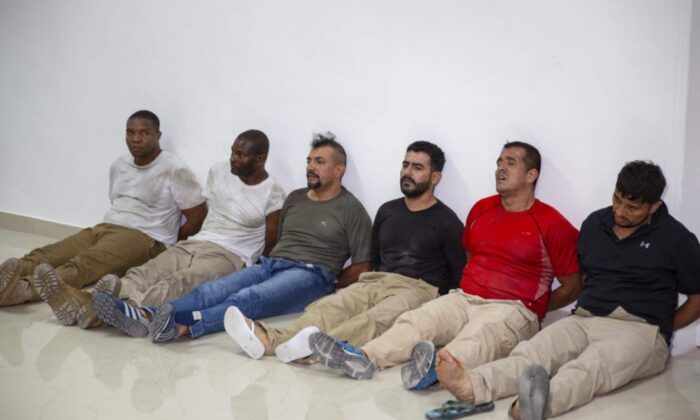 Suspects in the assassination of Haiti's President Jovenel Moïse, among them Haitian American citizens James Solages, left, and Joseph Vincent, second left, are shown to the media at the general direction of the police in Port-au-Prince, Haiti, on July 8, 2021. (Joseph Odelyn/AP Photo)
By Jack Phillips

A Drug Enforcement Agency (DEA) official has confirmed that a suspect alleged to be involved in the assassination of Haitian President Jovenel Moïse was a former informant to the agency.

“At times, one of the suspects in the assassination of Haitian President Jovenel Moïse was a confidential source to the DEA,” a DEA official told Fox News and other news outlets Tuesday.

After the assassination of Moïse earlier this week, the suspect reached out to his DEA contacts, while a DEA official called on him to surrender to local authorities, according to the spokesperson

“DEA is aware of reports that President Moïse’s assassins yelled ‘DEA’ at the time of their attack. These individuals were not acting on behalf of DEA,” the spokesperson said.

It’s not clear which suspect, if either, was the DEA informant.

A third Haitian American, Christian Emmanuel Sanon, was arrested on July 11 by Haitian authorities. They accused Sanon of being the mastermind behind the assassination.

The Department of Justice was asked by Haitian officials to assist in an investigation into the attack.

“An initial assessment has been conducted in Haiti by senior U.S. officials,” spokesman Anthony Coley said, according to Reuters. “The department will also investigate whether there were any violations of U.S. criminal law in connection with this matter.”

Solages has described himself online as a “certified diplomatic agent” and the former “chief commander of bodyguards” for the Canadian Embassy in Haiti. Those statements were made on the website of a charity he ran, which removed the statements on July 8.

“An unidentified group of individuals, some of whom were speaking in Spanish, attacked the private residence of the President of the Republic and mortally wounded him,” Prime Minister Claude Joseph said in a statement about the attack last week, noting that the suspects were armed with “high-caliber weapons.”

Moïse, 53, and his wife were attacked at about 1 a.m. local time on July 7 in Port-au-Prince, Joseph said.

“The security situation of the country is under the control of the Haitian National Police and the Haitian Armed Forces,” he said in the statement. “All measures are being taken to guarantee the continuity of the State and to protect the nation. Democracy and the Republic will triumph.”

Representatives for the DEA didn’t respond to several requests for comment by press time.