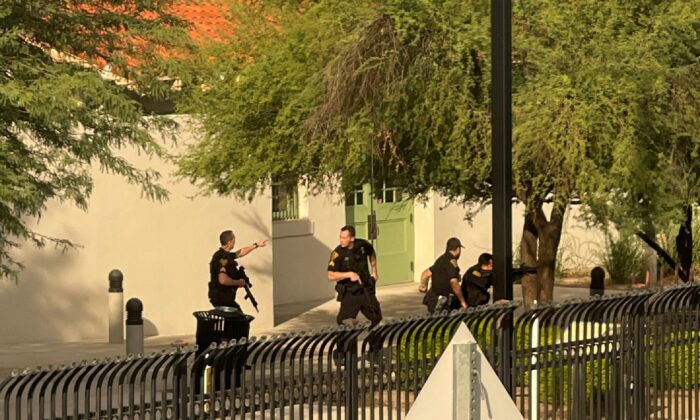 A view of security officers near the site of a shooting onboard Amtrak, in Tucson, Ariz., on Oct. 4, 2021. (@evancourtney/via Reuters)
Crime and Incidents

A Drug Enforcement Administration (DEA) agent was killed and two other law enforcement officers were injured in a shooting aboard an Amtrak train in Tucson on Monday, officials said.

One suspect was in custody while another one died in the shooting that erupted during a routine check at the downtown Tucson transportation hub by officers with a regional drug task force, Tucson Police Department Chief Chris Magnus told a news conference.

None of train’s passengers and no bystanders were injured as the incident unfolded, he added.

“I just think it’s kind of incredible here that there weren’t other people that were hurt,” Magnus said.

Authorities did not identify the DEA agent killed in the shooting. Among the members of law enforcement agencies injured was a DEA agent, as well as an officer with the Tucson Police Department, authorities said.

As officers boarded the train on Monday morning, they made contact with two individuals on the second level of a double-decker car on the stationary Amtrak train, Magnus said.

As they detained one, a second suspect pulled a handgun and opened fire on law enforcement. The man later barricaded himself in one of the car’s bathrooms, where he was found dead, the chief said.