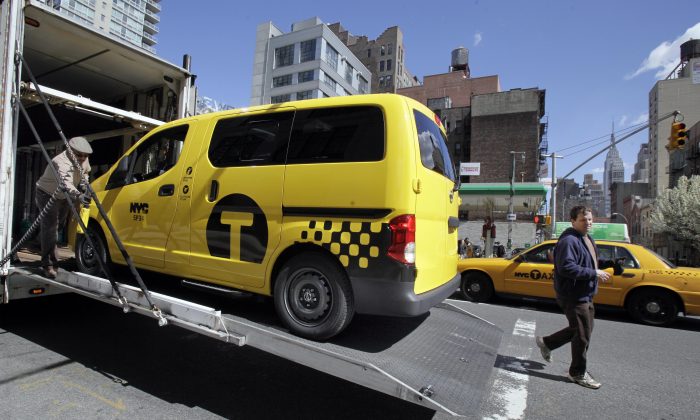 NEW YORK—Mayor Bill de Blasio still opposes the Taxi of Tomorrow, despite an appeals court ruling in favor of the plan issued on Tuesday.

The Taxi of Tomorrow is one of the key transportation initiatives of former Mayor Michael Bloomberg. Under the plan, all of the vehicles in the city’s taxi fleet would be converted to a single model—the Nissan NV200.

Nissan won an exclusive bid to provide the vehicle to the city by offering an array of convenient features, including top-tier passenger safety, USB chargers, sliding doors, a moonroof, and ergonomic seats.

Bloomberg’s plan faced opposition because the NV-200 was not accessible to people with disabilities and did not feature a hybrid engine. Yellow taxi drivers felt like the city shouldn’t impose which vehicles they could and could not buy.

De Blasio joined the opposition when he was public advocate. The taxi industry poured money into his mayoral campaign coffers.

“I think it is not right to have a single vehicle approved instead of a variety of vehicles that need certain standards,” de Blasio said at an unrelated press conference Wednesday. “I don’t like that we’ve lost an opportunity to create jobs here in New York City. I don’t like Nissan’s involvement in Iran. I don’t like a lot of things about this.”