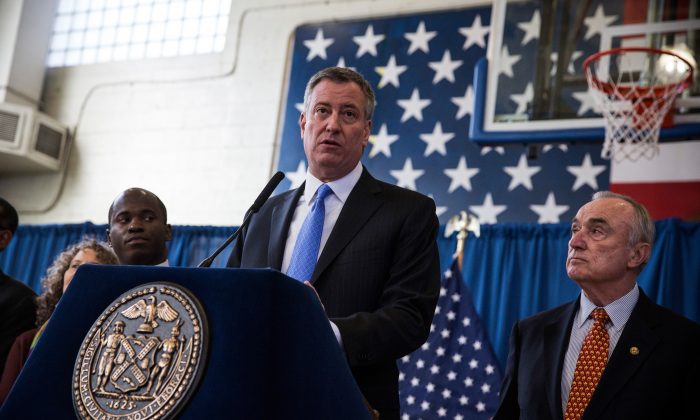 De Blasio announced that the city is prepared to drop its appeal against a federal judge’s ruling in Floyd v. City of New York, a landmark stop-and-frisk case, pending a District Court’s approval of a modification of the judge’s orders. The city’s modification seeks to limit the term of the court-appointed monitor to three years, contingent on the city being in full compliance with the judge’s decrees by that time.

At the announcement at the Brownsville Recreation Center in Brooklyn, Police Commissioner Bill Bratton said that upon the completion of the three-year term, the responsibilities of the monitor will be shifted to the independent police inspector general. The position of the inspector general was created through a separate legislative effort to reform the stop-and-frisk practice by the City Council.

De Blasio’s move to dismiss the city’s appeal comes a month after his landslide victory in the mayoral race, which he won on a message of ending inequalities in the city. Critics of the stop-and-frisk practice say that it disproportionately affects young black and Latino men. The mayor campaigned on a promise to end the overuse of stop and frisk and supported both of the City Council bills aimed at reforming the practice.

“Neither the police commissioner nor I believe it is acceptable when 90 percent of people stopped and frisked are innocent of any crime. So we are taking significant corrective action to fix what is broken,” de Blasio said in Brooklyn Thursday.

Though the police department has not yet taken concrete measures to reform its stop-and-frisk practices, de Blasio’s move to dismiss the appeal marks the beginning of a significant shift for the city’s police department. So far precincts have only received messages to conduct routine stops respectfully, pending the development of a set of guidelines by Bratton, the court ordered monitor, the independent inspector general, and the newly appointed Deputy Police Commissioner for training Benjamin. According to Bratton, when the appeal is dropped, developing that set of guidelines will be the police department’s first priority.

Floyd v. City of New York was filed against the city and its police department in 2008. The plaintiffs charged that the stops were unconstitutional with the majority taking place in communities of color.

In 2013, Judge Shira Scheindlin ruled that the police department violated the constitution and ordered four sweeping remedies, including the appointment of a court monitor, Peter Zimroth, immediate reforms to stop-and-frisk practices, and a pilot program which would have police officers equipped with body-worn cameras.

The city’s appeal came during the last months of a 12-year tenure of former Mayor Michael Bloomberg and former Police Commissioner Ray Kelly. Both defended the police department’s use of stop and frisk adamantly. Bloomberg and Kelly ended their terms one month ago as the murder rate in the city dropped to a historic low—down to 333 murders from 661 when Bloomberg and Kelly took office in 2001.

But Bloomberg’s tenure also coincided with several years of record-high numbers of stop and frisks, peaking at more than 685,000 stops in 2011, according to data from the NYPD. The number of stops reduced since, with less than 179,000 stops through the first three quarters of 2013.