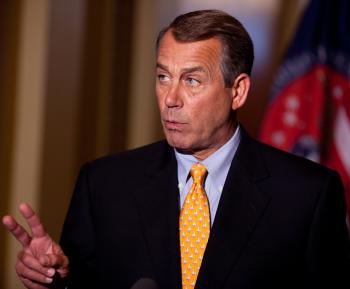 Speaker of the House John Boehner (R-OH) holds a news conference in the U.S. Capitol on April 1, 2011 in Washington, DC. (Brendan Hoffman/Getty Images)
US

By Andrea Hayley
Print
WASHINGTON—House Speaker John Boehner (R-Ohio) has decided to give his personal stamp to a national movement that would direct federal dollars toward private school vouchers.

In what is likely to be the only bill sponsored by the house speaker this legislative session, Boehner has gone all out to show his support for the seven-year-old program he helped craft, but which was in the process of being phased out under the Democratic majority.

The Scholarships for Opportunity and Results Act, also known as SOAR, began in 2003 with an initiative Boehner worked on when he was a member of the education committee. Boehner has brought life back to the idea with a proposal for $300 million in new funding, and provisions that would raise the minimum household income required to qualify.

The program would offer scholarships to thousands of students from low-income families who could not otherwise afford to choose a private education. Awards range from $8,000 for elementary school students and $12,000 for high school students.

Prior to last week’s vote, Boehner made headlines after he invited several students, parents, and teachers from Washington Catholic schools who have already benefited from the program as his private guests for the State of the Union address.

Boehner’s proposal passed the House on March 30 almost exclusively along party lines. Ninety-six percent of Republicans supported it, and 100 percent of Democrats opposed it.

With the government already spending over $10,000 per K-12 pupil, proponents of private school vouchers suggest there is little difference in giving that money directly to parents to spend on tuition at the school of their choice. Proponents also argue that private schools deliver a better education than what is available through public schools, although studies that factor for ethnicity, parental education, and family household income, show little difference in student achievement.

SOAR represents the first and only case in the nation where federal funding is being used to pay for private school education.

Those who oppose the bill cite a 2006 study by the U.S. Department of Education, which found that grade four students in public schools actually performed better in math, than equivalent students in private schools.

The same study showed that grade eight students improved in reading, and there is evidence to suggest that graduation rates are better in private schools.

During a three-hour floor debate, congressional delegate Ms. Eleanor Holmes Norton (D-D.C.) strongly opposed the bill. She argued that the bill represents an unwanted imposition of a federal mandate on the district.

“It is one thing to have no democracy. It’s another thing to dress your version of policy on another jurisdiction,” she said.

She offered an amendment to redirect all funding from the bill into D.C. public and charter schools.

Some Democratic members of Congress supported Ms. Holmes Norton, while others voted no based on a lack of evidence that the program worked, as well as complaints that the added expenditure is unfunded.

Rep. Anthony Weiner, (D-N.Y.) objected on a point of order, saying SOAR violates a Republican “cut-as-you-go” rule against new spending that is not offset within the same bill.

Read more… Testimony given to the Senate3