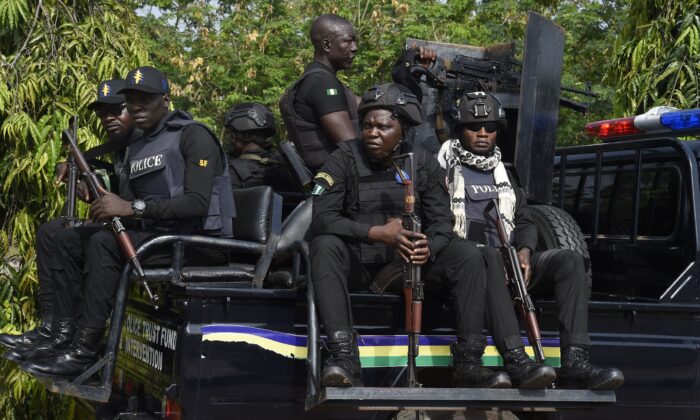 Days of Attacks Kill at Least 70 People in Northwest Nigeria

ABUJA, Nigeria—Gunmen have killed nearly 70 members of a local defense group in Nigeria’s northwest region in attacks since Sunday and the violence is continuing, members of the force and residents told The Associated Press.

The attackers ambushed members of the local defense group in the Zuru area of Kebbi state as they were responding to calls for help in some remote villages, John Mani, a leader of the civilian defense force in Zuru, said Tuesday.

At least 67 people have been confirmed dead from attacks by the gunmen, said Mani, who added that the death toll is expected to rise as the attackers “are still operating.”

“They just lay ambush on my people. They came and were doing their operations and my people went to see if they can help because the authorities are not doing anything,” he told AP.

Though Kebbi police spokesman Nafiu Abubakar confirmed the incident, he said the death toll is not known yet.

Residents have in the past accused authorities of being reluctant to speak about such attacks which have become rampant in northern Nigeria where remote communities are the most affected. Many times the violence is not reported until days later when officials recover the bodies of victims.

Although security forces have been deployed in the affected Kebbi communities, according to the police spokesman, the local defense force leader Mani said some of his men and local residents are still trapped.

“They are holding people hostage,” he said on the phone. “Even as we are speaking, they are there operating around Giri Wasa village.” He alleged that the security agencies “didn’t respond at all.”

Nigerian authorities have in the past identified the attackers as young men mostly from the Fulani ethnic group who have traditionally worked as nomadic cattle herders and have become caught up in a decades-long conflict with Hausa farming communities over access to water and grazing land.

Northwest Nigeria has been the worst hit by the spiraling violence, accounting for thousands of deaths in the last year, according to figures reported in the local media citing residents.

The West African nation’s security forces are already overstretched fighting a decade-long insurgency in the northeast region while many of them continue to respond to pockets of crises across the country.

Nigeria declared the gunmen operating in more than 100 groups as terrorists last year and vowed to stamp out the violence but the situation has not noticeably improved, especially in remote communities where security forces are outnumbered and outgunned.

After dozens were killed in the troubled northern region in January, Niger State Governor Abubakar Sani Bello admitted that “we have really run out of patience with the terrorists.”

But similar rhetoric from the government and security agencies have not been followed up with adequate assistance to residents who are resorting to community defence groups, according to local leader Mani.

“If the government is there, how can an untrained civilian carry locally-made arms to face somebody with sophisticated weapons?” he asked. “You just have to sacrifice. Either you face them or you still die or they capture you and you lose everything—that is the predicament.”