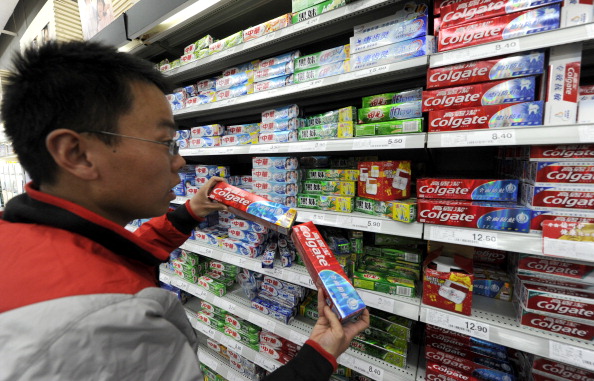 A shopper picks toothpaste at a supermarket in Beijing on March 30, 2011. (Liu Jin/AFP/Getty Images)
Social Issues

China’s biggest shopping festival is just around the corner. Celebrated on Nov. 11, it is also known as Singles’ Day—a day when single people find comfort for their lonely hearts by hanging out with friends or engaging in some retail therapy. In recent years, it has become more about the shopping frenzy, slowly but surely becoming a global phenomenon.

With online retailers offering big discounts to entice customers, customers are willing to dig deep into their pockets during the festival. For instance, Alibaba, China’s biggest online retailer, saw sales reach US$14.3 billion and US$17.8 billion in the span of just 24 hours, in 2015 and 2016 respectively, according to the MIT Technology Review. However, the festival has been mired with scandals in the past: stories of fake or substandard products, or retailers intentionally jacking up the price just before offering a steep discount.

This year, the General Administration of Quality Supervision, Inspection, and Quarantine, the agency responsible for consumer safety in China, announced that a nationwide campaign against fake products would begin on Oct. 25 and end on Nov. 15.

Just days before the festival, another scandal erupted in China. Chinese authorities seized over 100,000 fake toothpaste products, most of them knockoffs of well-known Chinese and foreign brands, including Colgate, Crest, Darlie, and Yunnan Baiyao, reported state-run media Xinhua on Nov. 1. The products were seized from over 2,000 different stores across 10 provinces. The products’ value, including accounting for machinery and raw materials that were used for their production, was estimated to top 15 million yuan (about $2.3 million).

The police captured over 40 suspects, and seized six toothpaste production sites and 50,000 tons of raw materials.

Chinese netizens on Weibo, the Chinese version of Twitter, were outraged by the scandal. Many began to question whether the toothpaste at home was fake. Their anger was directed at the suspects, but others showed frustration with the Chinese regime.

A netizen from Fujian Province with the moniker “Li_ttttt” wrote, “If the [consumer safety] department has really done its job, people will be safe and blessed.” Some were unhappy that the state-run media were quick to teach people how to distinguish fake products from the real, instead of telling the Chinese regime to do more to ensure the public’s safety.

Some netizens offered pessimistic views. One netizen from Guangdong Province wrote, “How many products are there in China that people can really have faith in?”

The sentiment was shared by another netizen from Liaoning Province, “When will China be free of fake products?” One netizen from Jilin Province bluntly wrote, “China is one mighty power known for fakes.”

Others shared their experiences on how best to avoid fake toothpaste. One netizen said he spotted fake toothpaste at a local store because it had the brand name “Yunnan Zhongyao,” just one Chinese character different from the real brand “Yunnan Baiyao.” Another netizen suggested that it would be safer to make their purchases at Walmart, instead of local shops.

Some netizens were concerned about the effects on their health from using fake toothpaste made with unknown substances. One netizen, now knowing that toothpaste can be fake, expressed suspicion about the one he was using, given that he had tooth pain after drinking cold water in the morning.

A day after the toothpaste scandal, state mouthpiece broadcaster CCTV reported a blacklist of 500 electronic stores that either already had their business licenses revoked or had been named on the “dishonest debtor” list—an online platform created by the Chinese regime to publicize the names of defaulting debtors.

Though this was an attempt by Chinese authorities to protect consumers, on Weibo, netizens complained, questioning how they could possibly remember the names of all these companies before going shopping. One netizen asked if somebody could turn the list into an Excel spreadsheet so people could check it more quickly.

All too often, Chinese consumers are duped by fake or substandard products. Consider one example: On Nov. 11, 2015, a man in Chengdu City bought a computer hard drive for 339 yuan (about $51) on Tmall, an online store operated by Alibaba, but he received five ceramic tiles instead. The vendor refused to provide a refund, insisting that the hard drive it had shipped must have been “swapped” by accident during delivery.