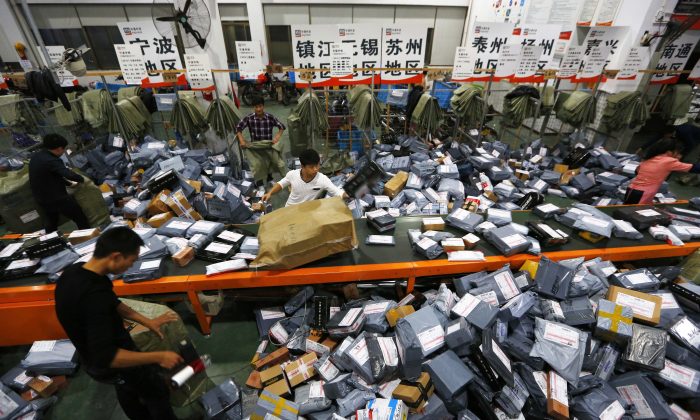 An mail crew deals with express packages at an assembly line on Nov. 12, 2014 in Wenzhou, Zhejiang, during Singles Day. (ChinaFotoPress/ChinaFotoPress via Getty Images)
China

How Many of Alibaba’s ‘Singles Day’ Sales Were Fakes?

You may not have heard of this Chinese holiday: Singles Day, or Double Eleven, celebrated on 11/11. It’s also known as “China’s online shopping festival,” because it’s all about shopping. Alibaba broke a new sales record: 91.2 billion yuan ($14.3 billion) in total sales, a 60 percent increase from last year.

This certainly made Alibaba very happy while awing the rest of the world. Many of my friends could not restrain themselves and joined the shopping craze. But others told me they would not partake because events like this one are created and hyped up by online retailers.

A lot of the so-called discounts are fake, I was told, as prices on discounted merchandise had recently been raised prior to the sale. In addition, many of the discounted goods are said to be knock-offs. In other words, the Singles Day Shopping Festival can be a carnival of fake goods.

As expected, media reported cases of fake products the very next morning. A man from Qingyang District, Chengdu City had bought a computer hard drive for 339 yuan on Tmall.com on 11/11 to save 10 yuan, but he received five ceramic tiles instead. Calls to the vendor were fruitless. The vendor’s customer service department rejected the man’s demand for a refund. They simply insisted they had shipped the correct product and suggested that the product must have been “swapped” during delivery.

Other stories I heard were about people getting knock-offs or poor quality brand-name merchandise. But receiving a bunch of tiles instead of a hard drive is a new one.

There has been a lot of speculation about the quantity of fake products being sold on Alibaba’s online shopping platform. Economist Zou Lan said it’s 40 percent. Some of my friends believe it’s over 50 percent.

My editor friend, who always shops online, told me that even authentic products sold online on 11/11 were poorly made. Furthermore, there is no guarantee you’ll get authentic products that are well-made and of quality even when shopping in department stores. Customers are only interested in price, he said. In other words, with so many counterfeit goods and such a small chance of being able to return merchandise, customers have to take the loss.

Chinese consumers in general find it difficult to protect themselves from fake goods.

Seeing my puzzled expression, my friend asked me about my experience with counterfeit products in the United States. I thought for a long time but could not remember one single case of fake products I’ve run into in the United States. When returning merchandise in the United States, one does not need to give any reason. You simply return the item together with the receipt within the specified time frame, usually one to three months, even if the original packaging has been opened.

This system works very well to restrain and punish businesses that are selling counterfeit products. It can lead to an investigation by government agencies, and even get the offending business listed on the United States Trade Representative’s (USTR) Notorious Markets List. In addition, there are various regulatory organizations where customers can file complaints or initiate a class action suit. This can result in huge compensation payments that may even force bad businesses into bankruptcy.

I’ve heard about knock-offs … but receiving a bunch of tiles instead of a hard drive is a new one.

Talking about the Notorious Markets List, Alibaba was once on this list and will probably be added to it again this year. The USTR annually publishes a list of notorious platforms selling fake or pirated goods. Taobao, an e-commerce platform managed by Alibaba, was once listed for selling pirated and fake goods.

In order to be listed on the U.S. Stock Exchange, Alibaba let go of its CEO and COO during the 2001 fraudulent collusion supply chain scandal, and Alibaba made great efforts to resolve brand owners’ complaints.

In 2012, Taobao was removed from the USTR blacklist. However, last year the online supplier giant once again received multiple complaints from businesses.

Earlier this year Kering SA filed a lawsuit in New York against Alibaba for brand infringement, including The Trademark Working Group with some of the world’s top 500 brands of trademark.

U.S. markets also reacted strongly to Alibaba’s fake product scandal. Although the transaction volume on 11/11 reached astronomical figures, Alibaba’s shares in the United States have been continuously falling lately and dropped back below $80.

Kynikos Associates founder Chanos recently publicly spoke bearishly about Alibaba. More than a year ago Chanos vowed to short sell U.S. bio-pharmaceutical company Valeant. Sure enough, now Valeant’s shares have dropped by nearly half. Now he has his eye on Alibaba; it seems to have touched a sensitive nerve in the market.

In the United States, retailers selling fake goods will be severely punished by consumers, supervisory agencies, and finally by the market itself. Alibaba’s experience is a good example of how this system works.

But Chinese consumers in general find it difficult to protect themselves from fake goods. The man in Chengdu who received a bunch of tiles instead of a hard drive ran into much trouble asserting his rights. The seller insisted there was no problem with the order on their side, implying the customer was lying. Even though the man had videotaped everything, from the delivery man entering the door to him opening the package, he was still not able to get a refund and had to resort to filing a report with the Qingyang police. Who knows how many other people experienced similar things.

This is an abridged translation of an article first published online on Nov. 13, 2015, on. Xinlu Duwu is a Chinese blogger currently based in the United States.