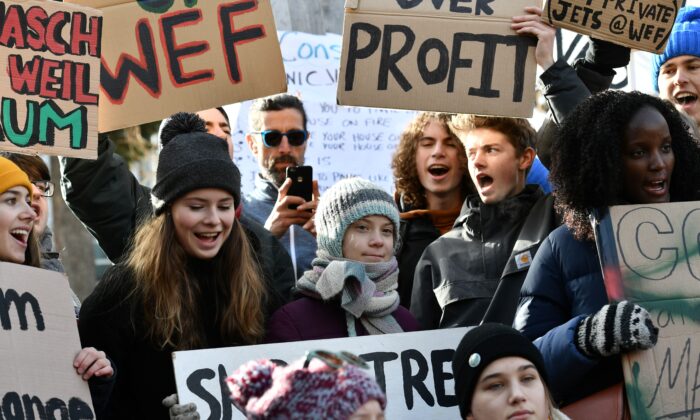 Swedish climate activist Greta Thunberg (C) marches during a "Friday for future" youth demonstration in a street of Davos on the sideline of the World Economic Forum annual meeting, on Jan. 24, 2020. (FABRICE COFFRINI/AFP via Getty Images)
US News

WASHINGTON—The Davos economic summit last week turned into a climate-change conference, as both political and business leaders felt real pressure to take the crisis seriously at this year’s gathering in the Alpine village.

However, the annual meeting ended with little consensus over the scale and urgency of the climate threat. Differences in opinions on how to save the planet without disrupting the economy grew even wider among the global business and political elites.

On the first day of the World Economic Forum (WEF) in Davos, Switzerland, on Jan. 21, President Donald Trump launched a thinly veiled attack against climate activists, calling them “prophets of doom.”

“While many European countries struggle with crippling energy costs, the American energy revolution is saving American families $2,500 every year,” he said, adding that the United States no longer depended on imported energy “from hostile nations.”

During his speech, Trump criticized climate alarmists without directly naming any of the notable activists in Davos, including Swedish teenager Greta Thunberg.

A 17-year-old activist, Thunberg, who has risen to fame recently, was one of the highest-profile attendees at this year’s summit.

“She beat me out on Time Magazine,” Trump said, referring to the publication’s naming Thunberg as “Person of the Year” in 2019. He also said he would have “loved” to see her speak.

When asked at a press conference if he still thought climate change was a hoax, Trump said, “No, not all.”

But he doubted the scale of the crisis.

“I think aspects of it are. I think that some people are—they put it at a level that is, you know, unrealistic, to a point you can’t live your lives.

“We have to do something about other continents,” he said. “You have another continent where the fumes are rising at levels that you can’t believe—I mean, I think Greta ought to focus on those places.”

Businesses Push Back on Climate

In Davos, some bankers resisted the idea that Wall Street should take the lead in the climate fight.

“I don’t want to be the sharp end of the spear,” Michael Corbat, chief executive of Citigroup, told a panel in Davos. “We don’t want to find ourselves being the person that dictates winners and losers.”

Speaking on a separate panel, Goldman Sachs CEO David Solomon said his firm wouldn’t stop raising money for a fossil fuel company but would try “to allocate capital to businesses that help the transition to a more carbon-neutral world.”

Some other executives also said the demands by climate activists ignored the importance of economic growth and the need for continued investment in fossil fuel, according to a Wall Street Journal article.

Larry Fink, CEO of BlackRock, the world’s largest asset manager, however, said in Davos that his company put sustainability at the center of its investment strategy.

Speaking at a panel session on Jan. 23, former U.S. vice president and longtime climate activist Al Gore compared the scale of the crisis to famous battles in history, noting that the crisis is “way worse” than many people realize.

Thunberg and other young climate activists attending the forum called on leaders to stop investing in traditional fuels. They have demanded all companies, banks, institutions, and governments to immediately end ongoing investments in fossil fuel exploration and extraction. They have also called for ending subsidies and completely divesting from fossil fuels.

On the last day of the summit, Thunberg rebuked the Davos crowd for not taking the climate crisis seriously.

“Before we came here, we had a few demands for this WEF and of course, those demands have been completely ignored. We expected nothing less,” she told reporters on Jan. 24, before marching through the streets of Davos with dozens of young activists.

While Trump took an indirect approach to climate challenge in Davos, U.S. Treasury Secretary Steven Mnuchin launched a direct attack on the young activist for her comments about ceasing all use of fossil fuels.

“After she goes and studies economics in college, she can come back and explain that to us,” he said Jan 23 during a press briefing in Davos.

In response to Mnuchin, Thunberg said on Twitter, “It doesn’t take a college degree in economics” to understand that ongoing fossil fuel subsidies and investments and the remaining carbon budget “don’t add up.”

The transition to a 100 percent renewable U.S. power grid will cost up to $4.5 trillion over the next 10 to 20 years, according to a report by the energy consultancy and research firm Wood Mackenzie. The company estimates that about 1,600 gigawatts of new wind and solar capacity would be needed to replace all fossil fuel generation in the United States.

While climate change topped the agenda at this year’s forum, no one has come up with plans to offset the costs of decarbonization on those it will hurt most, said Philip Stephens, chief political commentator at the Financial Times.

“These are the voters to whom Mr. Trump was speaking in Davos,” he wrote on Jan. 24 in his column.

“A large swath of voters look at green policies through the same prism as Mr. Trump—something that wealthy globalists inflict on the poor when they are not hopping from continent to continent on their private jets.”