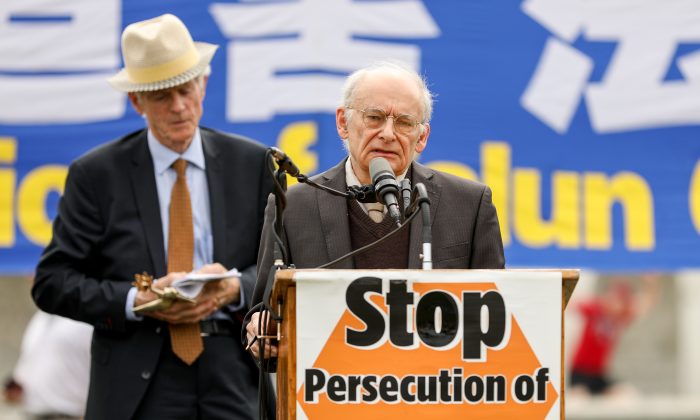 Chinese regime has not 'switched gears' in its brutal suppression of Falun Gong adherents, Matas says
By Andrew Chen

The corruption charges and subsequent downfall of several top officials in China’s Gestapo-like “610 Office” doesn’t mean the Chinese Communist Party (CCP) is changing its ways when it comes to its disregard for human rights, says well-known rights lawyer David Matas.

Fu Zhenghua, a longtime official in the Chinese public security sector, was recently placed under investigation for suspected “serious violations of discipline and the law” according to an Oct. 2 statement issued by the Central Commission for Discipline Inspection, the CCP department that polices corruption.

Prior to serving as justice minister from 2018 to 2020, Fu headed the 610 Office, a secretive agency created by former CCP leader Jiang Zemin to co-ordinate and implement the persecution campaign against Falun Gong adherents that began in 1999.

Matas, an international human rights lawyer based in Winnipeg, says the downfall of Fu and other high-ranking members of the 610 Office in recent years is due to fierce political infighting within the regime, rather than a change of heart by the CCP toward Falun Gong.

“Everybody, at least at the senior level of the party, is manoeuvring for position and everybody wants to move up a step. … Many of them have used the persecution of Falun Gong as a device for escalating their status in the Party, including Bo Xilai and Zhou Yongkang,” Matas told The Epoch Times.

“But I wouldn’t attribute it to the fact that the Party has somehow switched gears on the persecution of Falun Gong. …  The persecution of Falun Gong just becomes surrogated in an internal communist Party power struggle … and the use of corruption by the disciplinary committee is basically just a political tool for manipulation in the power struggle.”

The trial and sentencing in 2013 of Bo Xilai, the former Party secretary of Chongqing, kicked off Beijing’s anti-corruption campaign, which within a few years saw the arrests and trials of multiple high-ranking CCP members, including Zhou Yongkang, the powerful former head of the domestic security apparatus.

The senior officials ousted in the CCP infighting in recent months include Peng Bo, a former deputy director in the 610 Office who was expelled from the Party on Aug. 17 after months of investigation, and Deng Huilin, a former security official who stood trial on charges of bribery on Sept. 10.

Falun Gong, also known as Falun Dafa, is a spiritual practice that includes meditation exercises and teachings based on the principles of truthfulness, compassion and forbearance. The traditional practice spread rapidly across China in the 1990s, with an estimated 70-100 million practitioners by 1999.

Jiang Zemin perceived Falun Gong’s popularity as a threat to the totalitarian rule of the officially atheistic communist regime, and in July 1999 launched a violent suppression campaign aimed at eradicating the practice.

“The concept for cold genocide is that it’s a genocide which doesn’t happened briefly, quickly, visibly, but happens slowly, and it’s not all that visible. And the numbers [of those killed] accumulate over time rather than occur all at once.”

He said the international community should “do everything that’s possible” to bring the CCP to justice for its human rights abuses.

He also warned that China’s hostage diplomacy has not ended with the recent release of Michael Kovrig and Michael Spavor, the two Canadians who were detained by Chinese authorities in Dec. 2018 shortly after Canada arrested Huawei senior executive Meng Wanzhou on a U.S. warrant to extradite her on charges of bank fraud.

Kovrig and Spavor arrived in Canada on Sept. 25, after Beijing released the two in a deal that ensured Meng’s return to China the same day.

“I wouldn’t say that just because the Michaels were returned, the threat of hostage diplomacy from China is over. On the contrary, the whole sequence shows that once it has happened, it obviously can happen again,” Matas said, adding that there are still over 100 Canadians detained in China, including Sun Qian, who was jailed for practicing Falun Gong.

“It’s not as if the Chinese said ‘OK, we’re sorry, we shouldn’t have done it, we apologize.’ They’re saying it didn’t happen, that it wasn’t hostage diplomacy, which means obviously they could do it again because they just deny it happening, but at the same time it is happening.”