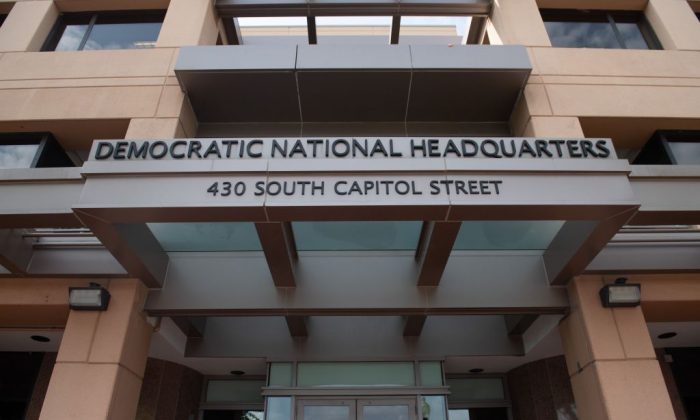 The headquarters of the Democratic National Committee (DNC) in Washington on Aug. 22, 2018. (SAUL LOEB/AFP/Getty Images)
Politics

According to National Book Award nominee and New York Times best-selling author David Horowitz, today’s Democratic Party is dividing the land of the free, and is even threatening its democracy, but says many are unaware of what’s happening.

One of the key examples of this, Horowitz said in an interview with The Epoch Times, is what happened when President Donald Trump won the election in 2016.

“Probably the most important feature in American democracy is that we have a peaceful transition on power. One of our most sacred traditions is when someone is legitimately elected you give them a honeymoon, an average of seven months, so they can put their policies in place,” he said.

Horowitz himself is a former radical socialist who was raised by communists. He later became a critic of the “New Left” and let go of Marxism entirely after a series of traumatic incidents made him question his convictions and identity, according to his 1996 memoir “Radical Son: A Generational Odyssey.”

He said Democrats today are actively destroying America by attacking its history and roots and twisting it to fit their agenda.

“You want to destroy a country, you attack its fundamental belief in itself,” Horowitz explained.

“Americans, until the Democrats started whacking away at it, we’re proud of its history of freedom. Our country inherited the British slave system, [but] our founding fathers declared that all men are created equal, regardless of race. That’s unheard of in the history of mankind. Slavery existed for 3,000 years.”

Horowitz said that free speech and the education system were taken advantage of by the Democratic Party to divide America.

He also blamed Republicans for not fighting back, stating “they won’t be aggressive.”

“The threat to free speech is the most dire threat in our country and it’s led by our universities, which are one-party, reactionary institutions. Actually, their curriculum is why people are bad, how a lot of people of so-called color are victims, which is horrific nonsense.”

Horowitz had already raised similar points in a book he wrote in 2006, “The Shadow Party,” with co-author Richard Poe, also a New York Times-bestselling author. The book detailed how billionaire George Soros, Hillary Clinton, and other radicals of the 1960s took over the Democratic Party and warped it into its current state.

“Schumer, Pelosi, and the whole Democratic Party are guilty and they are destroying the fabric of our democracy,” he said. “We are now two nations, we can’t even talk to each other.”

One example he gave was on immigration.

“Every time a Democrat says Republicans are anti-immigration they should wash out their mouth their soap. Don’t insult my intelligence by saying that, Republicans are for legal immigration. That’s a good debate to have, but Democrats don’t allow you to have that debate because they’re already calling you racist.”