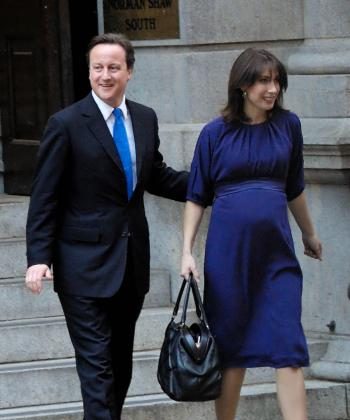 David Cameron heads out of Conservative Party headquarters with his pregnant wife Samantha on his way to the Queen at Buckingham palace. The Queen formally asked him to form the next government as prime minister. (Edward Stephen/Epoch Times)
Europe

By Simon Veazey
Print
David Cameron is the new U.K. Prime Minister. The transfer of power was swiftly set in motion when Gordon Brown resigned after failing to secure a power-sharing deal.

Standing outside 10 Downing Street at 8:45 p.m., Cameron announced that there would be a “proper and full coalition” between his Tory Party and the Liberal Democrats.

“This is the right way for the strong, stable, the good, and decent government that we need so badly,” he said.

Cameron said that he and the Liberal Democrats' leader Nick Clegg want to “put aside party differences and work hard for the common good for the sake of the national interest.”

A deal with the Liberal Democrats has been under negotiation for five days since the election failed to provide a clear winner but left the Tory Party with the most seats.

David Cameron stressed the challenges the country is facing, his speech peppered with references to responsibility.

“This is going to be hard and difficult work, and a coalition will throw up all sorts of challenges,” he said. “I want to try and help build a more responsible society here in Britain.”

In a statement that echoed U.S. President John F. Kennedy's 1961 inaugural address, and while stressing the challenges the country is facing, Cameron said he hoped people would “not just ask ‘What are my entitlements?’ but ‘What are my responsibilities?’ and not ‘What am I owed?’ but more ‘What can I give?’"

“I came into politics because I love this country and think its best days lie ahead,” he said.

Cameron was invited to form a government by the Queen of England hot on the heels of Gordon Brown’s announcement that he was stepping down as prime minister earlier in the evening.

A formality of Britain’s unwritten constitution is that the queen invites the party leaders to form a government. In the history of the country, 12 people have been invited to the prime minister post by the queen, with Winston Churchill being the first.

Cameron paid tribute to the outgoing government, saying that it had made the country “more open at home and more compassionate abroad,” for which he said people should be thankful.

Gordon Brown’s resignation came as the Liberal Democrats and the Tory Party were putting the final touches to a power-sharing deal.

Brown said that as prime minister he had been privileged to learn a lot about the best of human nature and the frailties of human nature, not least of all his own.

He also said that he “loved the job,” and it had been “a privilege to serve.”

“I wish the next prime minister well as he makes the important choices for the future,” he said.