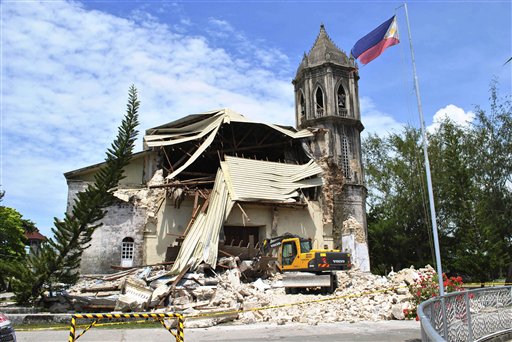 A crane shifts through the rubble of the damaged Our Lady of Assumption Parish church following a 7.2-magnitude earthquake, at Dauis in Bohol, central Philippines, Tuesday Oct. 15, 2013. The tremor collapsed buildings, cracked roads and toppled the bell tower of the Philippines' oldest church Tuesday morning, causing multiple deaths across the central region and sending terrified residents into deadly stampedes. (AP Photo)
Asia & Pacific

Dauis Church and Loay Church were damaged by the earthquakes that hit the Philippines on Tuesday, starting with a 7.2 magnitude quake and followed by a series of strong aftershocks.

The historic churches are in Bohol, where the quake’s epicenter originated. While numerous cities and towns in the Philippines are damaged, Bohol Island suffered the heaviest damage.

Locals expressed sadness on social media following the pictures emerging of the damaged churches in the area.