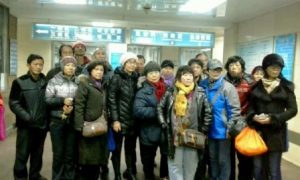 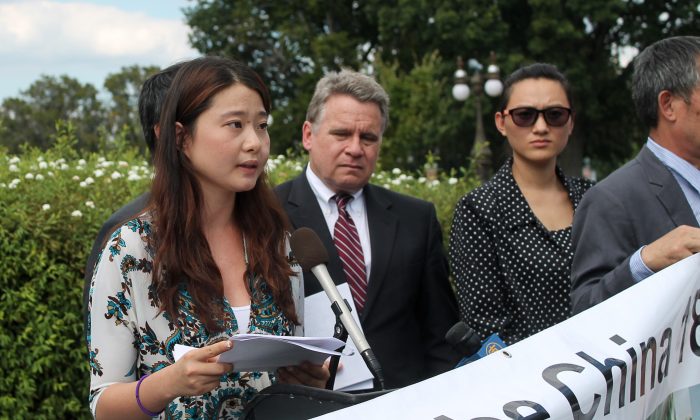 Daughters of Chinese Dissidents Call for Meeting With Obama

The White House says the president doesn't have time. Congressman Chris Smith asks him to skip a hole or two of golf
By Gary Feuerberg
biggersmaller
Print

WASHINGTON—With the vocal support of four congressmen, five daughters of political prisoners in China made a plea to the Chinese communist regime to release their fathers from prison. At a press conference, which was held at “House Triangle” outside the Capitol Building on Sept. 17, the group expressed a strong wish to meet with President Obama. They hope that he would raise their fathers’ cases with General Secretary of the Communist Party, Xi Jinping, when the two attend the Asia-Pacific Economic Council (APEC) summit, in Beijing this November.

Congressman Chris Smith (R-N.J.), who organized the press conference, said that because private diplomacy has not produced results, he wants the administration to take a new, tougher approach, and for the president to find his voice on human rights in China.

“The repression [in China] is pervasive, unrelenting, and absolutely unnecessary—as those detained love their nation and want China to reflect its highest ideals,” said Smith, who has held numerous congressional hearings on human rights in China. He held a hearing concerning the daughters’ appeal to Beijing, Dec. 5, 2013, when they gave formal testimony.

Smith made an impassioned plea to the president, pointing out that Obama has two daughters, and Smith has two daughters, and so both understand in a personal way what the Chinese daughters must be suffering. Smith wrote President Obama, asking him to meet with the families of imprisoned dissidents. But after six months, the only response he got from the White House was the president didn’t have time.

Smith suggested that he make time by skipping a hole or two of golf.

Chen said through a translator, “The freedom for China is really in the long-term interest of America.”

The daughter of Gao Zhisheng, Grace Geng, spoke of her father’s physical and mental condition upon his release in August after five years of isolation and imprisonment. The picture she painted of her father is a far cry from the articulate, established lawyer, who pro bono represented persecuted groups such as Falun Gong practitioners and peasants who were robbed of their land.

Geng described the solitary confinement that her father was subjected to. “In the past five years, my dad was imprisoned on a cage-like dark cell ward… My dad told me that the law allows no more than 15 days imprisonment in such a cell ward, to prevent causing serious physical and mental damage to the prisoner. But my dad was thrown in such a cell for years. The cell had no windows, no roommates, no sunlight, no fresh air at all.”

Geng said that her father is physically impaired and has difficulty walking. He badly needs to see a dentist. His teeth are mostly loose, and he is unable to chew. He is in constant pain. She said he speaks with a lisp and respond slowly or not at all.

Geng said that her father is not really free. Twice a day, in the morning and afternoon, the police visit for two hours, and harass him and the family members he is staying with.

She begs the President and Secretary of State John Kerry to help her father reunite with the family in the United States, where he can get his illnesses treated.

“As an ordinary, powerless young girl, what else can I do?”

Congressman Smith said, “Gao’s medical parole and reunion with his family should be a top priority of the Obama Administration.”

Ti-Anna Wang said her father Wang Bingzhang has been imprisoned for 11 years of a life sentence, and is serving it in solitary confinement. Mr. Wang, who was the founder of the overseas Chinese democracy movement and started the dissident magazine China Spring, was kidnapped while in Vietnam and taken to China where he was subject to a sham trial. Now 67 years-old, his daughter is very worried about his health.

“The past decade of confinement has taken an irreversible toll on his physical and mental health,” she said. She hasn’t been able to visit her father in the last five years because the Chinese regime refuses to issue her a visa. Her speaking out for his release has resulted in this punishment, she said.

Esther Huixin Zhang spoke on behalf of her father Zhang Shaojie, a Christian pastor, who was sentenced to 12 years in July. He was not allowed to see his lawyer for 101 days. A first he was charged with disturbing the public order, and since then, the charges have changed a few times. Before he was arrested, her father and the family had been followed. In their household and friends, very large surveillance cameras were installed, she said.

The daughters of attorney Chang Boyang and Liu Xianbin spoke at the news conference. Friends of Tenzin Delek and Lobsang Tsering also spoke.

Ti-Anna Wang said the best hope the five daughters have for their fathers’ release is for the U.S. government, including President Obama, “to intervene more assertively on our behalves.”

According to Rep. Smith, the way forward for the United States to become more assertive in encouraging respect for human rights in China is to support H.R. 5379, the Human Rights Protection Act of 2014, which he introduced. He said it would allow “the President to deny entry visa and freeze the assets of any Chinese official who tortures and abuses freedom-loving dissidents like Gao Zhisheng.”

Correction: The name of the daughter of Zhang Shaojie, the Christian pastor, is Esther Huixin Zhang, not Rachel Zhang Huixin.