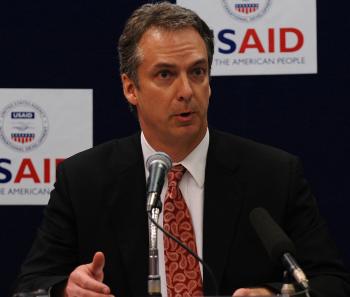 US ambassador to Thailand Eric John, speaks at the US embassy in Bangkok on May 8, 2008. John's Daughter Nicole died falling from a building in Manhattan, New York early morning on August 27. (Nicolas Asfouri/Getty Images )
International

Nicole John, Daughter of US Ambassador, Dies in NYC

At 4:14 a.m. on Friday, John slipped from the top floor's ledge of a 25-story building, where a friend lives, according to the Associated Press.

Police believe that before the incident John and friends were drinking in the apartment and at a Manhattan club.

Ilan Nassimi, 25, who rents the apartment has been arrested on charges of unlawful dealing with a minor, according to AP.