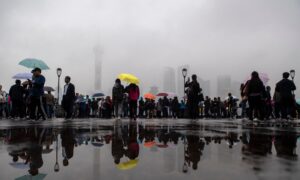 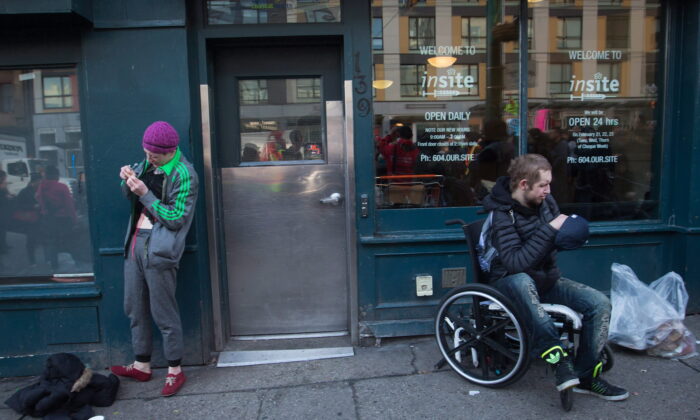 A woman prepares to inject herself with an unknown substance as a man sits in a wheelchair outside the Insite supervised consumption facility in Vancouver’s Downtown Eastside on Feb. 21, 2017. (The Canadian Press/Darryl Dyck)
Canada

The increase in drug-related deaths over the past two decades show that drug decriminalization and harm reduction have had adverse results and led to more dire consequences, says a California-based author and journalist who once advocated for both.

Between 1996 and 2000, Michael Shellenberger supported harm reduction policies and fought for the treatment of drug addiction as a public health problem rather than a criminal justice issue, and for housing to be given to the homeless regardless of their personal struggles with drugs.

But with the liberalization of drug laws, everything he thought was right about this approach in dealing with drug addiction turned out to be wrong, Shellenberger told The Epoch Times, noting that statistics have proved otherwise over the years.

“The most important example is that 93,000 people in the United States died last year from illicit drugs, making drugs, poisoning, and overdose the number one cause of accidental death in the United States,” says Shellenberger, the founder and president of Environmental Progress.

In an article he published this month, Shellenberger compares overdose deaths in 2020 to what they were 20 years ago when drug laws became more lax.

“Over the last 20 years the U.S. liberalized drug laws. During that time, deaths from illicit drugs rose from 17,000 to 93,000,” he wrote, comparing data from 2000 and 2020. “Two and a half times more people die from illicit drug use than from car accidents; five times more die from drugs than homicide.”

Data from the National Center for Health Statistics of the U.S. Centers for Disease Control and Prevention show that by January of this year, the reported number of overdose deaths in the United States had risen to over 94,000.

“Drug death is the greatest problem facing the United States right now, and that’s in part because it comes from so many other issues, including the lack of a mental health system, the lack of addiction service care treatments, and overall a general liberalization and relaxation of the laws against drug dealing and drug use,” Shellenberger says.

Environmental Progress, which describes itself as “a research organization that incubates ideas, leaders, and movements, including for the goal of drug peace,” co-founded the recently formed California Peace Coalition to combat fentanyl addiction.

The trend of drug decriminalization has also caught on in Canada in the past few years. In October 2018, the federal government legalized the use of marijuana. In May, Vancouver became the first jurisdiction in Canada to request a federal drug law exemption, when it submitted its final proposal to Health Canada to decriminalize the simple possession of 15 illicit drugs under a certain threshold amount.

Calls for decriminalization have increased due to the surge in overdose deaths since the start of the COVID-19 pandemic, particularly in B.C., Ontario, and Alberta, with many overdoses caused by opioids such as fentanyl.

Canada’s first supervised drug consumption facility opened in Vancouver in 2003, and several other jurisdictions and countries have also adopted this approach. In Shellenberger’s view, it’s a slippery slope.

“Do we want to legalize heroin and cocaine? That’s the question that the whole society has to ask because if you open up a facility for people to use those drugs, then you’re making those facilities available to everybody, including your children and your neighbours’ children,” he said.

Decriminalization of illicit drug use in the Netherlands and Portugal is often held up as an example of how to solve drug addiction, but drugs remain illegal in both countries, which still ban drug dealing, arrest drug users, and send dealers and users to prison or for rehabilitation.

According to Statistics Canada, after legalization in 2018, cannabis use had increased by 2019 to more than 5.1 million people nationally, or 16.8 percent of Canadians aged 15 or older. This was up from 14.9 percent (4.5 million) in 2018 before legalization.

In the United States, marijuana legalization has led to an increase in use and addiction, according to an investigative study published in the Journal of the American Medical Association. The data show that between 2001-2002 and 2012-2013, the prevalence of marijuana use more than doubled from 4.1 percent to 9.5 percent. Marijuana use disorder also saw a significant increase, nearly doubling from 1.5 percent to 2.9 percent during the same period.

Both in Canada and the United States, many drug addicts among the homeless population suffer from untreated mental illness. Shellenberger believes one reason accounting for the high drug overdose deaths in the United States is the lack of effective and consistent mental health and addiction service care treatments across states and neighbourhoods.

He says the ideology of victimhood pushed by the progressive approach to drug addiction and homelessness is another reason that continues to fuel the overdose crisis.

“What they’ve ended up doing is removing all discipline and responsibility and accountability, and that’s why we have so many drug addicts with mental illness living on the street. … That’s why homelessness is so bad in California, because we’re all so liberal,” he says.

“It creates learned helplessness among people to tell them that they’re essentially victims.”