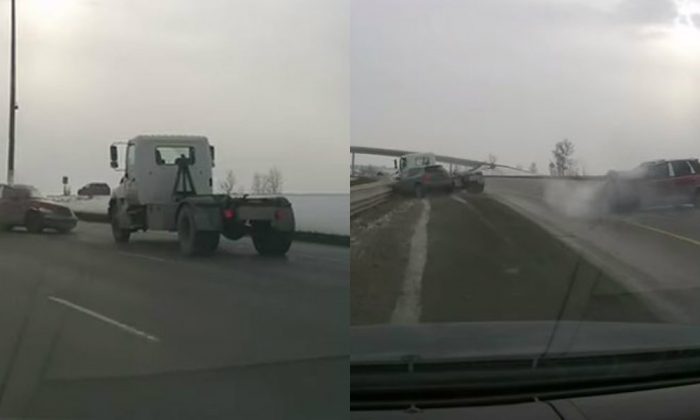 A dramatic video taken from a car’s dashcam shows a high-speed crash on Deerfoot Trail in Calgary, Canada.

The footage was posted on YouTube by user Nan Xu, showing several vehicles traveling southbound on the road. One of the vehicles in the left-hand lane appears to lose control and spin. The video can be viewed here:

The car then crosses the busy highway and slams into a large truck. The truck then cuts through the left-hand lanes and hits a minivan, according to GlobalNews.ca.

Two people were taken to the hospital with minor injuries, said the website. They’re in stable condition.

“Just from looking at the video, it looks like coming around the turn one of the vehicles lost control,” Calgary police Det. Jody Cross told the Calgary Sun. “[The driver] hit the ice, spun out a little bit, and, luckily, nobody was hurt.”

Officers responded to the scene, but no charges were handed down.

The original YouTube video can be seen here (WARNING: The video contains profanity at the end):