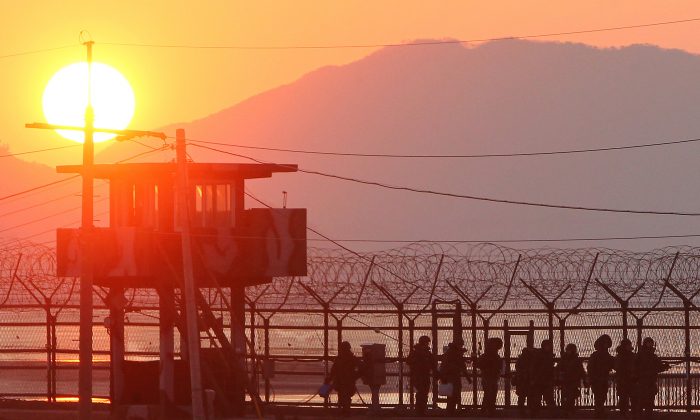 With governments on both sides of the DMZ extinguishing what little remained of the "sunshine era" of engagement, the peninsula is lurching toward a new period of darkness

As the world focuses on the war in Syria, the refugee crisis in Europe, and the primary slugfest in the United States, the two Koreas are heading toward a catastrophe in the Far East.

Although relations on the Korean peninsula have been deteriorating for the better part of eight years, the last six months have been particularly tense. North Korea recently conducted its fourth nuclear test and followed up with a satellite launch using a long-range rocket. The international community reacted in its customary fashion, with condemnations and the imposition of more sanctions. South Korea joined in the chorus of disapproval.

But this time, South Korea went a step further. It severed its last important economic link with the North.

The Kaesong Industrial Complex was the only legacy remaining of the ‘sunshine policy.’

The Kaesong Industrial Complex was the only legacy remaining of the “sunshine policy,” the Nobel-Prize winning project of former South Korean President Kim Dae-jung. Established in 2004, the economic zone brought together South Korean businesses and North Korean labor in a business park located just north of the Demilitarized Zone (DMZ) in the ancient Korean capital of Kaesong.

Last week, South Korean President Park Geun-hye pulled the plug on Kaesong. North Korea expelled the South Korean employees and froze the assets. The North also cut the communications hotlines that had connected the two countries. In this way, the two sides cooperated one last time to extinguish the final fading rays of sunshine.

The South Korean Ministry of Unification initially claimed that the proceeds from Kaesong helped the North fund its nuclear and missile programs. The minister subsequently walked back that claim, admitting that the government had no such evidence. That didn’t prevent President Park from repeating the same claim the next day.

The nosedive in relations on the Korean peninsula is already having a regional impact. North Korea has announced, in response to a new round of sanctions from Tokyo, that it’s suspending its investigations into the people it abducted from Japan in the 1970s and 1980s. Both China and Russia are concerned that South Korea will adopt a new missile defense system in the wake of North Korea’s actions. And the United States has sent four F-22 stealth fighters to fly over South Korea in addition to an aircraft carrier already on its way for upcoming exercises.

But it’s the suspension of Kaesong that remains most troubling. The project represented the only real example of Korean reunification avant la lettre: a model for how the two very different countries could gradually work together toward common goals. Kaesong had survived for more than a decade despite North Korea’s nuclear tests and South Korea’s shift to the right. It symbolized the triumph of pragmatism over propaganda.

Park Geun-hye has abandoned all her earlier talk of a “trustpolitik” policy of engaging the North. “We now need to find a fundamental solution to effectively change North Korea, and it is our time to be brave,” she said this week. Those sound a lot like fighting words.

Optimists always say that it’s darkest before the dawn. But we’re well past dawn on the Korean peninsula. We’re heading toward a showdown at high noon. And yet the sky seems to be getting darker and darker. Can all the parties concerned somehow avert a total eclipse of the sun?

The Importance of Kaesong

At its height last year, the Kaesong Industrial Complex employed over 50,000 North Korean workers and over 800 South Korean managers at 124 firms. As a result, 2015 was a very good year for the economic zone. For the first time since it started over a decade ago, the complex generated more than $500 million in economic output. That’s a lot of shoes, overcoats, and electrical products, many of which are sold in South Korea.

North Korean workers, mostly women, earned $150–160 a month. The North Korean government took approximately 70–80 percent of that total, which led many outsiders to conclude that the place was a “sweatshop,” even a place of “slave labor.”

But $30–48 a month, given North Korea’s depressed economy, is a lot of money for a North Korean—not to mention the other benefits, such as lunches and snacks, that came with the job. The average worker at a state enterprise only makes about $1 a month. The working conditions at Kaesong, meanwhile, were a lot better than anything you’d find in other North Korean factories. Although North and South Korean workers ate separately and kept their interactions to a minimum, the complex nevertheless provided an unprecedented opportunity for each side to humanize the other.

As North Korean defector Je Son Lee recently wrote, “When I was still living in North Korea, people used to say, ‘If you have one person in the family who works for Kaesong Industrial Complex, it can feed the mouths of everyone in their family.'”

Unfortunately the international community largely treated Kaesong as the bastard child of inter-Korean relations. God forbid that any Kaesong products might have sneaked into other countries covered by free-trade agreements with South Korea. As I wrote back in September:

Despite trade union concerns, the FTA—which went into effect in 2012—has not extended any benefits to Kaesong. The United States—along with the EU and Turkey—relies on a panel to determine if any products from Kaesong are eligible under the FTA. So far, the panel has nixed every product.

Nor was North Korea able to attract significant foreign investment into the zone beyond that from the South Koreans.

And yet ironically, here was something that U.S. and South Korean conservatives should have been rushing to support. It was a clear capitalist encroachment into what many consider one of the last bastions of communism in the world (though I prefer to think of North Korea as an example of corporatist nationalism). It was a non-union zone, and conservatives love to talk about how much they hate unions (except, of course, in countries where they want workers to organize and effect regime change).

And the zone was smack dab in the middle of one of North Korea’s invasion routes into the south. As of last week, the North Korean military has taken control of the area. In what possible way could the closure of Kaesong represent a win for Seoul and Washington?

When pressed by Chuck Todd of MSNBC at one of the Democratic debates to pick the biggest threat to the United States—Russia, North Korea, or Iran—Bernie Sanders chose North Korea.

That in itself wasn’t such a strange answer. After all, the United States continues to cooperate with Russia on a number of issues and has recently concluded a nuclear agreement with Iran. No one in Pyongyang or D.C. was going to get angry at Bernie for that.

In fact, Sanders’s full response revealed not so much his ignorance of foreign policy—a favorite evaluation of media savants—but how thoroughly mainstream his approach is:

Clearly North Korea is a very strange situation because it is such an isolated country run by a handful of dictators, or maybe just one, who seems to be somewhat paranoid. And, who had nuclear weapons.

And, our goal there, in my view, is to work and lean strongly on China to put as much pressure [as possible]. China is one of the few major countries in the world that has significant support for North Korea, and I think we got to do everything we can to put pressure on China. I worry very much about an isolated, paranoid country with atomic bombs.

Sanders supports increasing sanctions against North Korea and wants to pressure China into doing likewise. Again, this puts the Democratic presidential candidate in good company. The Senate passed the most recent sanctions legislations 96 to 0, and the House did the same by a margin of 408 to 2.

But here’s the problem with this position. First, if isolation is what makes North Korea so dangerous, why would more international sanctions make the country any less of a danger? Second, if China has resisted pressure for more than two decades to turn the screws on its neighbor, why would it change its position now?

I’m not happy that North Korea has a nuclear weapons program. And believe me, China isn’t happy either. But registering our opposition to the program will not magically eliminate the North’s nukes. Nor will additional sanctions convince the leadership in Pyongyang to change their minds, any more than the economic embargo against Cuba transformed the system there. North Korea is convinced that the outside world wants to destroy it—which is not mere paranoia—and a nuclear weapon is its only security blanket.

The cynical will say that the international community has tried both isolation and engagement, and neither has worked. But that’s not really true. The international community has put its body and soul behind isolation and has been, at best, half-hearted about engagement. If only to make the obligatory nod toward non-proliferation, politicians condemned North Korea for its nuclear tests and missile launches.

But at some point, again in the interests of non-proliferation, the key players have to get back to the table with North Korea and negotiate a freeze of its nuclear capabilities at their current rudimentary level. More importantly, we have to multiply the points of engagement, not shut them down.

The North Korean regime is noxious in many ways. But one thing is for sure: Even though it’s outgunned, it won’t stand down in a showdown at high noon. And unless we start using our words, East Asia will be plunged into a darkness far more profound than the one that so famously exists north of the DMZ at night.