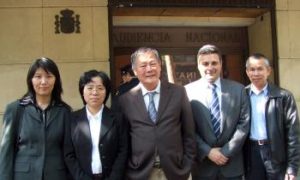 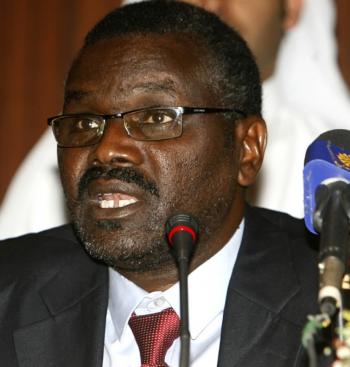 The leader of the Sudanese rebel group the Justice and Equality Movement (JEM), Khalil Ibrahim, speaks during a press conference in Doha on March 29. JEM has said that the Sudanese government has broken a ceasefire by attacking villages and other targets. (Karim Jaafar/AFP/Getty Images)
Africa

“Now the [Khartoum] regime either has to choose the path of war or the path of peace. If the offensive continues against our people we [will] consider taking further measures as well,” JEM spokesman Ahmed Hussein Adam was reported as saying by Reuters news agency.

A spokesperson for the Sudanese army denied there has been any military activity in recent weeks in Darfur.

In 2003, rebel groups in Darfur, a region in Sudan, clashed with the Sudanese government because of alleged oppression of black Africans in favor of Arabs. An estimated 300,000 people have died and 2.7 million people have become homeless as a result of the conflict.

In April, peace talks between the Sudanese government and the JEM began, under the mediation of Qatar, to find a compromise. The talks, however, quickly reached an impasse and JEM’s withdrawal is therefore said to be largely symbolic.

In March, the Sudanese government signed another peace framework with another major rebel group, the Liberation and Justice Movement (LJM), an umbrella organization of 10 splinter factions.

The Sudan Liberation Army is the only influential rebel group the Sudanese government didn’t sign a peace deal with before the elections. They have so far refused any negotiations.

Commentators say the talks paved the way for a smooth election this year. President Omar al-Bashir was re-elected despite being indicted by the International Criminal Court on charges of crimes against humanity for his role in the genocide in Darfur. Bashir has been in power since his military coup in 1989.