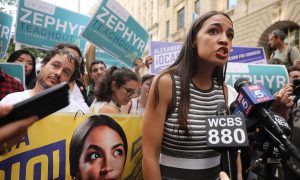 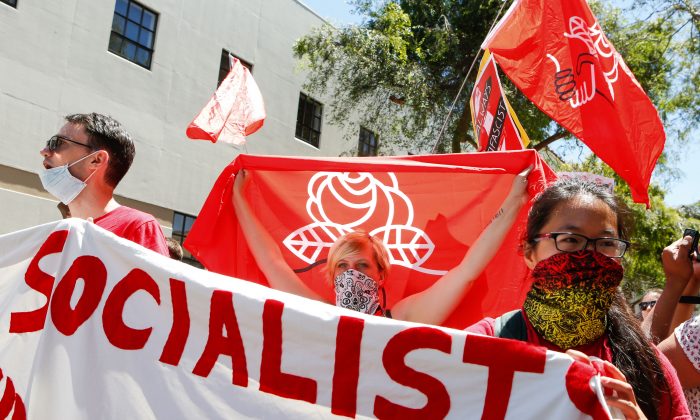 The California Democratic Party (CDP) is the target of heavy infiltration by the United States’ largest Marxist group, the Democratic Socialists of America (DSA).

Working with the Communist Party USA (CPUSA) and other socialist groups, the DSA looks likely to capture both the CDP chairmanship and a significant number of Central Committee seats at the upcoming state convention, to be held from May 31 to June 2 in San Francisco.

The DSA has exploded from around 6,000 members in 2016 to almost 60,000 dues-paying members today. A huge influx of new members—some already Democratic Party activists and officeholders—has empowered the DSA to infiltrate and often capture local Democratic Party branches in virtually every state.

California is now effectively a one-party state. Democrats hold every major statewide office in California and enjoy supermajorities in both the state Assembly and state Senate. The only real battle now is between the CDP’s center-left wing and hard-left wing, with the latter coalescing around the DSA.

That battle is being fought through the Assembly district election meetings (ADEMs). These are grassroots, internal elections held every two years in each of the state’s 80 Assembly districts, the most recent being in January 2019. Fewer than 40,000 registered Democrats vote in these elections, so an organized hard-left takeover is feasible.

The DSA now has around 25 local chapters in California and likely well over 5,000 members. The DSA controls or influences most of the “Our Revolution” branches in California, plus the Bay Area’s Wellstone Democratic Renewal Club, Wellstone Progressive Democrats of Sacramento, the Feel the Bern Democratic Club of Los Angeles, and the statewide California Democratic Party Progressive Caucus. The DSA also has close allies in the Service Employees International Union, National Nurses United, and other unions.

The DSA and a sprinkling of CPUSA and Freedom Road Socialist Organization (FRSO) allies now have the numbers to conquer the CDP from the grassroots up—and they’re doing it.

According to the Capitol Weekly:

“The secret to success in these elections is to form ‘slates’ of candidates in all of the state’s 80 ADEM districts. Each district elects seven women and seven people who do not identify as women. If 14 progressives come together and agree to rally 50 friends each to vote for their slate, they can sweep the region. …

“ADEM delegates make up just one-third of the state’s 3,000-plus Democratic State Central Committee slots—the others are allocated to Democrats holding office throughout the state, their appointees, and county committee party members.”

However, ADEMs are still the most effective way for the far left to gain a decisive influence in the party.

“The delegates in the state determine who are the endorsed Democrats, what the party platform is, what the rules are, what resolutions are supported,” Eric Sunderland, Region 3 director of the CDP and a close ally of the Sacramento DSA, told Capitol Weekly.

Socialist delegates also are looking to gain more influence on elected officials. Talks have started with the goal of creating a lobbying arm that would “establish a heavier influence on party members in the state Legislature.”

According to Capitol Weekly, in District 9 (Sacramento area), DSA comrade Harjit Singh Gill registered as a Democrat to support fellow DSA-er Peter Brogan, who won a seat. The Sacramento DSA endorsed the “progressive” slates in Districts 7, 8, and 9, which they won, resulting in 11 DSA comrades winning delegate seats.

This process has been repeated all over California from San Diego to Shasta County, San Bernardino to San Luis Obispo.

At the upcoming state convention, the winners of the 2019 ADEMs can vote, along with other members of the Democratic State Central Committee, on who will be the next CDP chair. The post is open because former chairman Eric Bauman resigned in November 2018 over sexual misconduct allegations from party staffers and political activists.

In the contest for the post of CDP chair, Kimberly Ellis, who narrowly lost to Bauman in 2017, is running against current party Vice Chair Daraka Larimore-Hall and four other candidates to date.

While the DSA backed Ellis in 2017, it’s likely they’ll back Larimore-Hall this go around. He already has been endorsed by several DSA comrades, including Santa Barbara stalwarts Dick and Mickey Flacks and DSA front group Millennials for Revolution.

Larimore-Hall is a long-time DSA comrade. In 1995, he was a co-chair of the DSA Youth Section, while a sophomore at the University of Chicago. Two years later he was elected to the DSA’s ruling body, the National Political Committee, at the November 1997 DSA National Convention in Columbus, Ohio.

In 1996, Larimore-Hall also represented the DSA in “socialist unity” talks with other Marxist groups, including Committees of Correspondence, Solidarity, and the FRSO.

Larimore-Hall also was active in the more than 100 parties-strong Socialist International, which the DSA was affiliated to until 2016—finally leaving because it was no longer radical enough.

Through the Socialist International, Larimore-Hall met and befriended a young New Zealand militant who served as president of the International Union of Socialist Youth in 2008. Eleven years later, Jacinda Adern has become world famous as the New Zealand prime minister, busily confiscating guns and suppressing free speech in the wake of the recent Christchurch mosque massacres carried out by Australian, and likely “National Bolshevik” activist, Brenton Tarrant.

In recent years, Larimore-Hall has been working his way through the ranks of the Santa Barbara Democratic Party and the state party. In my opinion, he will almost certainly soon chair the CDP.

The DSA is allied with three pro-Beijing Marxist groups—CPUSA, Committees of Correspondence for Democracy and Socialism, and FRSO through the “Left/Inside Outside Project,” a formal plan to infiltrate the Democratic Party nationwide.

If the DSA and its allies succeed in dominating the CDP, which has a near-monopoly in the state, the economic, political, and social consequences for California would be dire.

Worse, it would pose a major national security problem for the whole country as more socialists would be planted in the U.S. Congress and U.S. Senate, and thousands of Marxist radicals would be appointed to California state jobs.

California is already in near-open rebellion against the Trump administration. If the DSA and their Marxist allies gain a controlling influence in the CDP and, by extension, the fifth-largest economy in the world, we can reasonably expect disastrous consequences on all fronts.