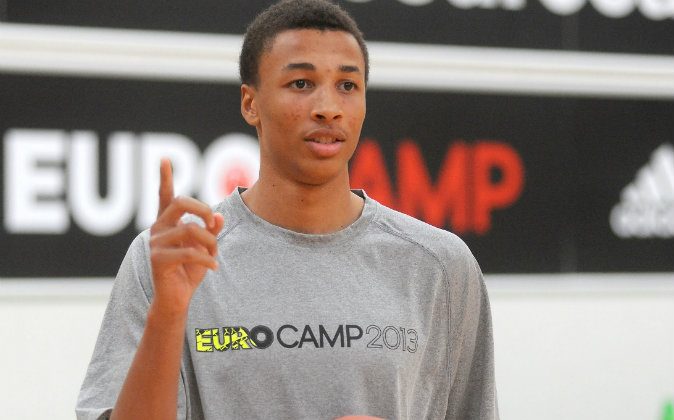 Dante Exum is projected to be the number four pick in the 2014 NBA Draft on Thursday night.

Exum hails from Australia, and is the son of Cecil Exum, an American who played for the University of North Carolina, Chapel Hill in the 1980s.

Although Exum Senior won a title with the Tar Heels in 1982, Dante won’t be following in his father’s footsteps in college basketball, and has instead declared for the 2014 NBA Draft.

Check out an Associated Press report on the draft below.

PHILADELPHIA (AP) — The Philadelphia 76ers scorched their roster and abandoned a competitive season all for one reason, the chance to turn the NBA draft into a cornerstone for a championship run.

The Sixers command the NBA’s attention for once for something other than a 26-game losing streak. They hold the third and 10th picks Thursday night, and five more in the second round.

They are one of the more intriguing teams in the draft, dreaming of the potential that two top-10 picks hold, either as potential stars or as trade bait. But one thing is for sure, team president Sam Hinkie knows he can’t go bust in a draft that could define the organization for a decade or more.

The Sixers hold the No. 3 pick because of a 19-63 record out of a team full of D-League castoffs and stopgap players. They have the No. 10 pick because of Hinkie’s stunning 2013 draft night deal that saw them trade All-Star Jrue Holiday for Nerlens Noel and the pick.

The bold trade was the first sign that Hinkie wasn’t afraid to think big — and only for the future — in his first season running the organization. The Sixers hit it big when they drafted point guard Michael Carter-Williams with the 11th pick and watched him blossom into the NBA rookie of the year.

Noel seems recovered from the torn anterior cruciate ligament in his left knee that cost him all of his rookie season.

MCW, Noel and two lottery picks could anchor a franchise stuck in the second half of the Eastern Conference for most of the last 13 years since their Allen Iverson-led run to the NBA finals.

Then again, Hinkie isn’t afraid to wheel and deal, and few around the league believe the Sixers stand pat at 3 and 10.

Hinkie has refused to even hint at what the Sixers might do — the front office has gone silent since the draft lottery in May. Hinkie went into hiding, the Sixers refused to release names of prospects invited to workouts, and media was booted from their practice facility for trying to catch a word with potential No. 1 pick Andrew Wiggins during a secret workout.

The Sixers have closed their practice facility to the media again Thursday night and will not make Hinkie or other team personnel available.

Long the fourth team in Philadelphia’s crowded sports market, the Sixers hoped to make a splash in the draft. They also have the Nos. 32, 39, 47, 52 and 54 overall picks.

“This is the time of year where there’s a lot of information to be gained and a lot to be lost by the more you say,” Hinkie said after the lottery. “You’ve got to be pretty careful that people don’t know what it is you’re trying to do.”

You don’t have to be Hinkie to know the pool of potential players available at No. 3. Wiggins and Kansas teammate Joel Embiid, Australian guard Dante Exum, and maybe Duke guard Jabari Parker could be up for grabs.

If the Sixers don’t trade up to make a run at Wiggins, Exum could be the selection. The Australian guard is the top international prospect available and perhaps no coach in the league has a better scouting report than Philadelphia’s Brett Brown. Brown spent a chunk of his career coaching in Australia, and coached Exum’s father in the Australian National Basketball Association. Brown met Exum as a teen and watched him become a top prospect.

The Sixers proved last season they’re not afraid to wait, trading for Noel even though they knew he wouldn’t play a minute last season. Embiid, a 7-footer expected to be the No. 1 pick in the draft before a recently suffered stress fracture in his right foot, also fits into Hinkie’s vision.

Unlike most of last season, the Sixers expected to come out a winner.

“There’s a lot to be hopeful for, to have two top-10 picks in a draft like this,” Hinkie said.

The Sixers tried not to use the word, tanked. But with so many starters dumped, from Holiday to Evan Turner to Spencer Hawes, in the last season, the Sixers knew they had to get bad before they can get good. Hinkie — and a beat down fan base — can only hope his gamble was the right one.

“Most of the top players in the draft find Philadelphia a really attractive place,” he said. “They want to be in a place where they’ll have opportunity, they want to play in a big market, and they recognize what a big platform it is to play in Philadelphia.”