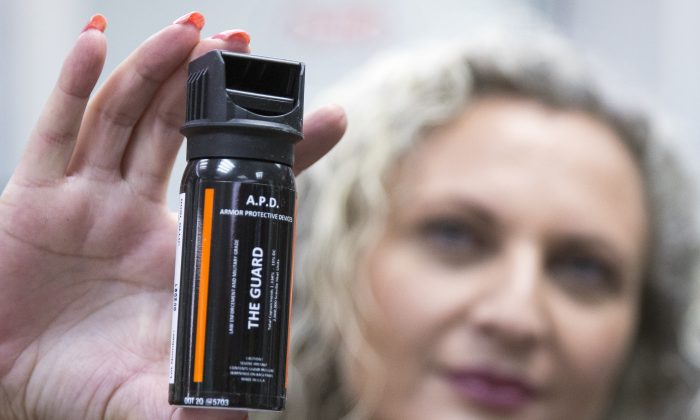 An employee at a gunsmiths and indoor shooting range in the Israeli coastal city of Tel Aviv shows pepper spray to a customer on October 13, 2015. (JACK GUEZ/AFP/Getty Images)
Europe

A 17-year-old girl in Denmark is facing a fine after using pepper spray to fight off an attempted rape, the Local reports.

The girl told authorities that the attack occurred in central Sonderborg around 10 p.m., when an English-speaking, dark-skinned man knocked her to the ground and tried to undress her. She then saved herself by using pepper spray on her attacker, and went to report the incident to police.

The man has not yet been arrested, but it’s likely the girl will be fined 500 kroner, or 73 dollars, reported local media.

“It is illegal to possess and use pepper spray, so she will likely be charged for that,” local police spokesman Knud Kirsten told the Danish-language TV Syd.
The story has sparked outrage online, and a number of people have offered to pay her fine in the comment section of a TV Syd report.

A 17 year old girl from denmark is facing charges for using pepper spray against the man that was SEXUALLY ASSAULTING HER. Makes me sick.

Good ol’ Denmark and Norway, where stopping rape with pepper spray is a crime. Next time, just get raped! #gunsense #WomensRights

The attack has been linked by some to the migrant crisis in Europe. In Germany, there was widespread outrage after it was discovered that police had suppressed information about organized sexual harassment of women by groups of migrants in the city of Cologne on New Year’s Eve.

In Norway, Muslim refugees are offered cultural lessons on how to treat women in Western society, the New York Times reported. Many refugees arriving from conservative countries are not used to seeing public displays of affection, or women dressed in what they perceive to be skimpy outfits, which they may liken to clothing worn by prostitutes.

Sonderborg, where the assault on the 17-year-old girl took place, has a local asylum center, and the influx of migrants has created a similar cultural friction there, reports the Local.

“We must say that a large number of the male guests who come from the local asylum centre have a very hard time respecting the opposite sex. In my eyes, it is harassment when one or more men continue to touch a young woman after she has said, ‘Stop’,” Glenn Hollender from the Sonderborg club Den Flyvende Hollænder told TV Syd.

The Buddy Holly nightclub in Sonderborg issued a new rule earlier this month, allowing only guests who speak Danish, German, or English into the club, due to incidents of sexual harassment by asylum seekers, the Telegraph reports.