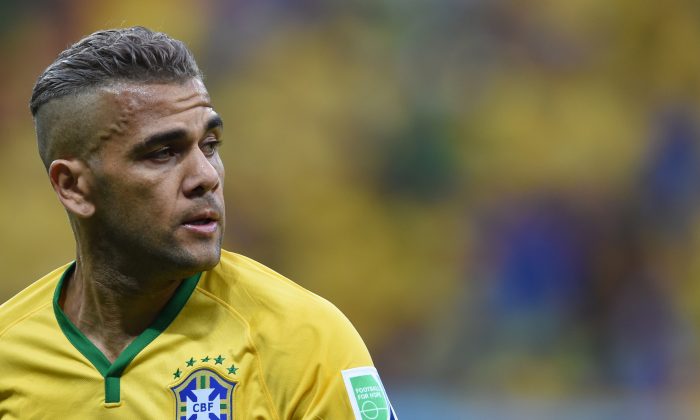 Brazil's defender Dani Alves reacts during a Group A football match between Cameroon and Brazil at the Mane Garrincha National Stadium in Brasilia during the 2014 FIFA World Cup on June 23, 2014. Brazil won 4 to 1 (FRANCOIS XAVIER MARIT/AFP/Getty Images)
Sports

There have been a couple of racism incidents so far at the Brazil World Cup, which is a pity considering how the footballing world responded to racism just a month before the World Cup.

On April 28, 2014, a Villarreal fan threw a banana at Barcelona and Brazil right back Dani Alves.

Instead of letting that get to him, Alves picked up the banana and took a bite out of it before taking a corner kick.

Barcelona won the match 3-2, and a global social media campaign against racism, where notable football stars in particular posted pictures of themselves with bananas, quickly followed the match.

Villarreal identified the culprit, a certain David Campaya Lleo according to Spanish media, 2 days later and gave him a lifetime stadium ban. The Spanish police arrested him after that.

Although Villarreal acted promptly to the racist act, they were still fined €12,000 ($16,331.75) by the Spanish Football Federation.

The public divide was revealed Thursday at a briefing involving the chairmen of FIFA’s task force against racism, Jeffrey Webb, and its disciplinary panel, Claudio Sulser. It came at a World Cup which FIFA President Sepp Blatter has pledged would not tolerate discrimination.

Webb is unhappy that evidence provided to Sulser’s panel — of fans chanting gay slurs, wearing black face make-up and carrying banners with far-right symbols — did not result in any sanctions.

Webb said a better strategy is needed at the 2018 World Cup in Russia.

“It is much more of a problem in Russia,” the FIFA vice president acknowledged after the briefing. “Russia itself needs a special task force, just for Russia and from an educational standpoint internally.”

Sulser defended his panel’s apparent inaction, saying that sanctions were not possible where no specific player or team was targeted.

“There have been isolated cases,” Sulser said through a translator, before adding that he did want to “intervene only for the sake of intervening.”

Asked about dropping a case against Mexico fans chanting a slur at opposing goalkeepers, he said: “They have used words which were inappropriate, even kind of rude, which were not directed at a specific player.”

The FIFA panel was supplied with evidence by monitors from not-for-profit fan groups. Those groups were given no formal role at the World Cup despite a proposal to FIFA by Webb’s task force.

Webb said there was “absolutely no reason” for this failure to step up evidence-gathering.

“It is very unfortunate. We had identified this as one of our top priorities,” Webb said.