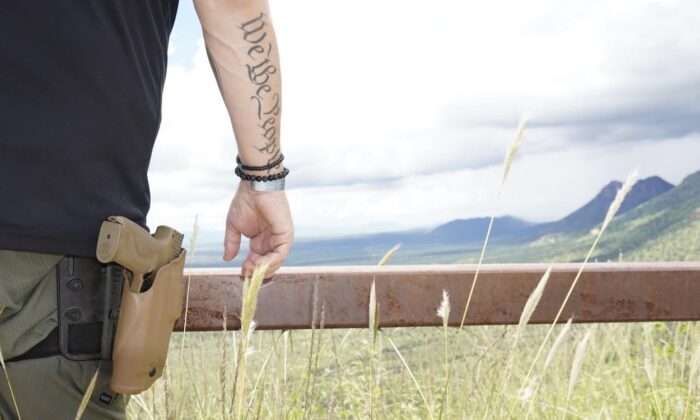 Sam, owner of a high-tech security company in Arizona, stands watch over the Mexican border from the summit of the Coronado National Memorial in Arizona. (Allan Stein/The Epoch Times)
US

ARIVACA, Ariz.—Human smugglers and drug traffickers operate in these woods, Sam my guide whispers as we trudge single file along the rocky edge of a mountain wash, searching for hidden water stashes and food.

His security man Kyle, AR-15 semi-automatic rifle locked and loaded, keeps a close eye on the dense brush above us.

He says you never know who could be watching and if they’re armed and intend to kill or abduct you. People have gone missing in these woods.

The worst thing would be to walk into an ambush.

To his boss Sam, Kyle signals and begins making his way up a steep slope in a remote area known as the California Gulch deep inside the Coronado National Forest in southern Arizona.

He stops, signs again, and pushes further up the rugged incline, where he finds empty water bottles, old footprints, and flattened grass.

“Coyotes”—human smugglers—strategically place water bottles and stashes of food for illegal migrants as they head on foot across the scattered mountain ranges north of Arizona’s 372-mile border with Mexico.

The coyotes work with the Mexican drug cartels, ushering desperate migrants through Arizona’s porous, unfinished border wall for a steep price. The cartels will often hire U.S. citizens to transport the illegal migrants to their drop-off points.

Some illegals, through choice, necessity, or coercion, will “hump” drugs for the cartels, carrying deadly fentanyl in camouflage backpacks for distribution throughout the United States.

Tragedy In the Desert

Sam and his security officers have encountered the remains of illegals whose luck and resources ran out as far as the city of Casa Grande 60 miles north.

“It’s beautiful [territory]. It’s treacherous if you have to walk it,” Sam tells The Epoch Times.

Hardly any of them are vetted once they get here, he says.

Some are terrorists or hardened criminals; many are women and unaccompanied children, he adds.

The “quitters,” Sam says, are those who give up but have the good sense to call for help before succumbing to the scorching heat and dehydration.

Sam and Kyle have seen some of the worst “hot spots” along the border wall in their line of work, providing high-end security for their clients, or as volunteer border monitors.

Sam’s $25 million firm is currently under contract to supply protection for the migrant buses sent to Washington and New York City from Arizona and Texas as part of Operation Lone Star.

Together Kyle and Sam surveille the border wall using thermal imaging cameras. Now, they have a $33,000 drone as part of their technology arsenal.

Recent drone footage captured a rival drug cartel faction camped out less than a mile on the Mexican side of the border wall east of the town of Arivaca.

To say their work is dangerous is an understatement. Sam and Kyle both survived a cartel booby trap made from a shotgun shell that damaged the company pickup truck two months ago.

As the company owner, Sam was recently targeted by a “Sicario”—a hitman sent by the Sinaloan drug cartel, which controls most illegal smuggling activity along the border.

For this reason, he asks that his name, company, and employees not be identified for their safety.

Sam and Kyle are ex-military, highly knowledgeable in the ways of the migrants and cartels. Both firmly believe the current President Joe Biden administration has allowed a humanitarian border tragedy to become a national existential crisis.

In this multi-part series, The Epoch Times will travel with these professional border watchers to known “hot spots” where even law enforcement is reluctant to visit.

You will see border fence gates left wide open; evidence of human smuggling; and hear a frank discussion of the impact of migrants on a local rancher and his wife and their plea for help.

You will see clear drone footage of a drug cartel faction showing heavily armed men, and the “humanitarian” response at the border wall.

Sam says America is a nation of immigrants. Still, the media has sanitized the crisis at the Arizona border wall and kept vulnerable areas out of the public eye.

With law enforcement spread thin, hamstrung by government policy, he envisions a local partnership consisting of private citizens, law enforcement, and security firms like his.

At some point, he says, the cartel violence will spread across the border into the United States when law enforcement is least able to deal with it.