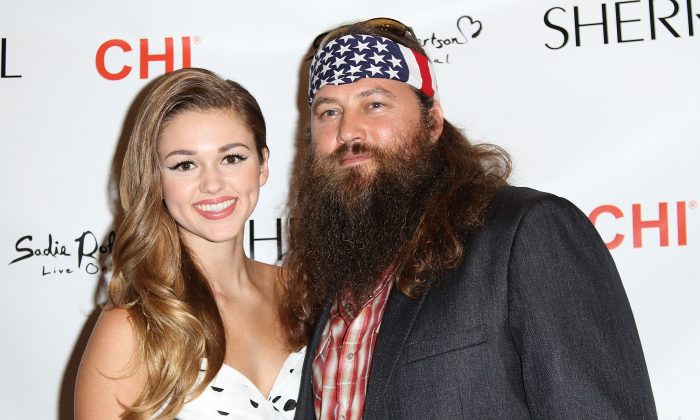 Sadie Robertson, a rumored cast member of the upcoming Dancing With the Stars Season 19, and her father Willie Robertson in this file photo. (Monica Schipper/Getty Images)
Entertainment

The latest Dancing With the Stars 2014 rumors include Sadie Robertson of Duck Dynasty and Phyllis Smith from The Office.

Robinson is a 17-year-old model whose mother is Korie Robinson.

Us Magazine reported, citing sources, that Robertson has been confirmed.

Korie gave a hint earlier this year, saying: “I think that our kids are really natural in front of the camera and they have fun with it,” the A&E star said when asked if she thinks her and Willie’s kids will continue with careers in the entertainment industry.”

“Sadie I think wants to maybe be on a talk show and she wants to be on Dancing with the Stars!” she added.

Lori Loughlin of Full House fame, singer Shania Twain, and Smith from The Office are also among the rumored cast members, reported Glamour.

Speaking about Smith, it said: “The Office alum would be the perfect fit for DWTS. Not only is she a fan favorite, but Phyllis actually was a burlesque dancer and football cheerleader back in her hometown of St. Louis. Given her lively personality, I’d pay to see her partner up with someone like Val Chmerkovskiy.”

Besides Loughlin, Andrea Barber is another rumored contestant: “We gotta keep the Full House momentum going, and who better than Aunt Becky or Kimmy Gibbler?” Glamour said.

Antonio Sabato Jr., a former model and General Hospital star; Olympian Lolo Jones; and Janel Parrish, whose character Mona was just killed off on Pretty Little Liars have been confirmed as part of the cast by multiple media outlets.

The full cast will be revealed on Good Morning America on September 4 while season 19 will premiere on September 15.

The professional dancers have been confirmed by ABC and will not include Maskim Chmerkovskiy, who doesn’t want to compete anymore after winning last season with Meryl Davis.