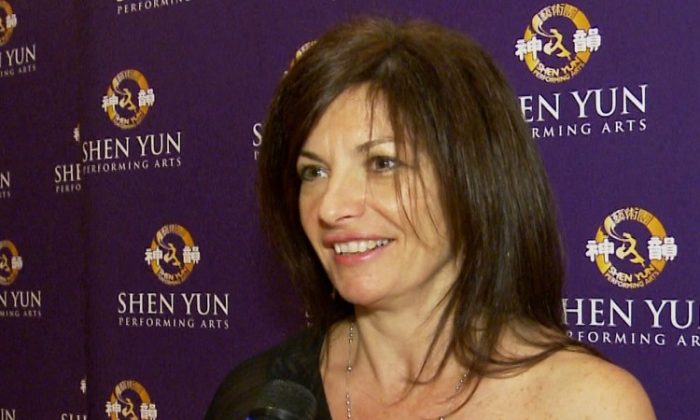 “I find it very interesting to find out about the culture and the classical Chinese dance—I’ve never seen anything like this before,” she said. “Through their dance you could definitely get an idea of the culture. I enjoyed it immensely.”

“The body movements had to be extremely hard,” said Ms. Troiano, adding that she noticed “the poise [and] the elegant ways they dance.”

New York-based Shen Yun tours the world with a mission to revive the 5,000 year-old, divinely inspired Chinese culture, after it was nearly destroyed by communist rule, according to the company. Digital backdrops, colorful, handcrafted costumes, and an orchestra the melds both Western and Chinese classical instruments accompany the dancers.

In the dance Lotus Leaves, “delicate yet playful … lotus maidens are at ease when dancing atop the waters,” according to Shen Yun’s program book. “The dancers’ unique full-circle fans sway like lily pads in the wind, evoking scenes of a flowering lotus garden in the summertime.”

Ms. Troiano loved Lotus Leaves, as well as How the Monkey King Came to Be, a humorous tale about a central character in China’s classic novel Journey to the West.

“It looked so easy but I’m sure it was so hard,” said Ms. Troiano.