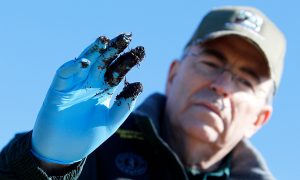 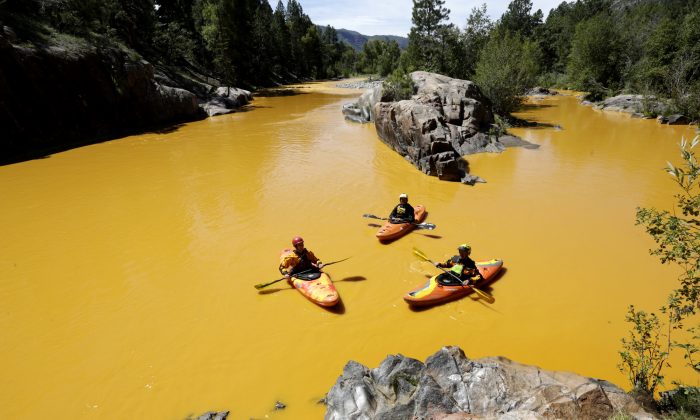 People kayak in the Animas River near Durango, Colo., on Aug. 6, in water colored from a mine waste spill. (Jerry McBride/The Durango Herald via AP)
US

Damages in Colorado Mine Spill Will Take Years to Tabulate

DURANGO, Colorado—The spill of toxic wastewater from an abandoned gold mine high in Colorado’s San Juan Mountains caused untold millions in economic disruptions and damages in three states — to rafting companies, Native American farmers unable to irrigate, municipal water systems and possibly water well owners. And largely because the federal government inadvertently triggered the release, it has vowed to pay the bill.

That bill could be years in the making. Attorneys general from Colorado, New Mexico and Utah vowed to ensure citizens and towns are compensated for immediate and long-term damages from the spill. But Colorado’s attorney general, Cynthia Coffman, acknowledged it could be years before the full impact is known.

“We have to be vigilant as attorneys general, as the lawyers for the state, as protectors of the environment, to be sure that the assurances that we received today from the Environmental Protection Agency are the same in two years, in five years, even 10 years when we discover what the damage to the environment actually is,” Coffman said Wednesday after she and her counterparts gathered in Durango.

EPA administrator Gina McCarthy said her agency took full responsibility for the spill, which was unleashed Aug. 5 when an EPA-supervised crew accidentally unleashed the torrent of wastewater from the Gold King mine. The plume of heavy metals, including arsenic and lead, flowed into southwest Colorado’s Animas River and into the San Juan River in New Mexico.

McCarthy also said she had ordered agency personnel across the country to cease field investigation work on abandoned mines while the spill was investigated. EPA officials said they were seeking details on what the stop-work order means.

The Gold King spill was proving devastating to the Navajo Nation, which recently negotiated a settlement giving it rights to water from the San Juan River. The tribe plans to build a $20 million water treatment plant in northwestern New Mexico to take in the extra volume of water granted by the settlement and provide a clean drinking source to more of the 16,000 families on the reservation who still haul water to their homes.

Heavy metals already were present in the tribe’s underground aquifers, and “now those same things are dumped in the river,” complained Rex Kontz, deputy general manager for the Navajo Tribal Utility Authority. He said meeting EPA standards for clean drinking water could double the plant’s cost and require millions more in operating costs each year.

The EPA said it will be Monday at least, but perhaps take weeks more, before test results can help show what hazardous materials are in the water. The higher the concentrations, the higher the cost of removing heavy metals. And unlike some other Native American tribes, the Navajo are not swimming in casino cash.

“This new water coming in was the avenue to creating new development and creating long-term sustainability,” Kontz said. “Now it’s almost like your legs were cut out from under you.”

Navajo farmers were nervously waiting for someone to announce that it’s OK to irrigate their crops again. Just two weeks without water could wipe out their corn and alfalfa just before harvest, which represents an entire year’s salary for some farming families.

Current Colorado law requires a mining company to post a bond to cover the eventual cost of cleanup before a permit is issued to start operations, said Tony Waldron, supervisor of mine programs for the state Division of Reclamation, Mining and Safety. If the company fails to clean up the site when the mine closes, the state uses the bond to hire a contractor to do the work.

In most cases, the bonds have been sufficient to cover the cost of cleanup when mine operators don’t finish, Waldron said. The state has a fund it can use to make up the difference.

But the Gold King Mine isn’t covered because it was abandoned in 1923, before the law was in effect. In the absence of an owner, the federal government was working with local residents and the state to do limited mitigation work in the area around the Gold King mine — one of a cluster of old and polluted mines perched more than 11,000 feet high — when the spill occurred.

Cleanup costs alone can be staggering — and continuous.

Colorado tightened its bond requirements in the 1990s after the operator of the Summitville gold mine in southern Colorado, Summitville Consolidated Mining Co., declared bankruptcy and couldn’t complete a cleanup. Summitville became a federal Superfund site, with the EPA in charge.

The cleanup is ongoing because contaminated water continues to drain from the mine. The total cost to date is more than $100 million, according to the U.S. Geological Service.

Authorities said Wednesday that the waste from the Gold King spill will continue to be dangerous when contaminated sediment gets stirred up from the river bottom.

“There will be a source of these contaminants in the rivers for a long time,” said hydrologist Tom Myers, who runs a Nevada-based consulting business. “Every time there’s a high flow, it will stir it up and it will be moving those contaminants downstream.”

EPA spill liaison Nat Miullo suggested the danger from the spill had diminished with the dissipation of the initial burst of tainted water. Any future spike in contaminant levels caused by stirring up sediments would be “much, much smaller in scale,” he said.

But environmental regulators in downstream New Mexico warned that it was crucial to determine where the contamination settles.

“Those are some of the longer-term issues that affect humans as well as wildlife,” New Mexico Environment Secretary Ryan Flynn said.