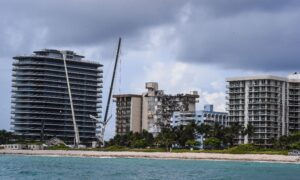 A three-story apartment building in South Florida was evacuated after an inspector discovered structural damage in a vacant unit.

Fire officials in Miami Beach were called to the residential building Saturday evening, spokesperson Melissa Berthier said in an email. A city building inspector found a flooring system failure and “excessive deflection” on an exterior wall.

The building was evacuated out of an abundance of caution, according to Berthier, and contains 24 units, including 11 units that were unoccupied.

One resident who is still searching for another place to stay is Jeffrey Gibson, a Navy Veteran who spent the night with his cat in his small car.

“(Police) explained that there is some like, I guess sinkage happening on the main level,” Gibson said. “And that was causing some extreme concern with, you know, the possibility of the whole building being extremely unsafe for anyone to live in. So that’s why the building was evacuated.”

The evacuation comes as several residential buildings were being evaluated in response to the partial collapse of Champlain Towers South in Surfside in Florida that has killed at least 24 people, with 121 people still unaccounted for.

On Friday in North Miami Beach, residents were forced out of the 156-unit Crestview Towers after it was deemed structurally and electrically unsafe.

“So I do believe there’s a serious domino effect that we might, you know very well see, in the near future.”