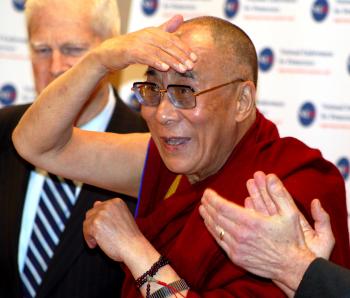 Dalai Lama Brings Joy and Laughter at Library of Congress

WASHINGTON—A side of the Dalai Lama that relatively few people know, was revealed at a ceremony in his honor at the Library of Congress on Friday, Feb. 19, where the National Endowment for Democracy (NED) awarded His Holiness the Democracy Service Medal.

The Coolidge Auditorium was packed to its capacity of approximately 500 to hear the fourteenth Dalai Lama, Tenzin Gyatso, as he graciously accepted the award for what he said was his small contribution to the betterment of six million human beings (presumably the population of Tibet), and the promotion of democracy.

According to Carl Gershman, president of NED, the Dalai Lama was a “devoted democrat” and had taken steps to modernize Tibet’s system of government even before he fled Tibet in 1959.

“This is not an aspect of the Dalai Lama that is well understood, especially by those who see him as the spiritual leader of a traditional people,” said Gershman.

The NED, which is funded by the U.S. Congress, praised the Dalai Lama for supporting a democratic government in exile and his willingness to even abolish his own spiritual authority in Tibet if that is what the Tibetans choose.

At the event we saw a humble man filled with humor and goodwill, even towards his adversary, the Chinese Communist Party, which calls him a separatist and had condemned his meeting with President Barack Obama the day prior.

He calls himself “the unluckiest Lama,” because he has spent more of his life as a refugee outside of Tibet than living in his country, according to Gershman. Nevertheless, he was grateful in one sense for his forced exile in that it allowed him to see and learn much from the rest of the world, most notably India, in how they are governed.

“I did not learn the value of democracy through education but through experience,” he said at the opening of his address.

As a youngster he befriended street sweepers, ordinary Tibetans, and heard their complaints about “injustices or drawbacks” in society—to be sure, not as bad as under the Chinese communist dictatorship but still bad.

The Dalai Lama told of a lesson he learned as a young man in the “big difference” between “authoritarian” and “open societies.” In 1954 he went as a “one-member Tibetan delegation” to the “parliament” in Peking and said he noticed the “complete silence” in the chamber. Many delegates were sleeping and not very engaged. When one member began to speak and complain, the person in charge told him to “shut up.” In 1956, he went to India where he observed their parliament that he found was “noisy and undisciplined” and people could express themselves freely.

He began the process of reform of the Tibetan government around 1952, because it was out-of-date and not suitable for contemporary society. But as the process got underway, the Chinese communists objected and said they had their own reform process. The Dalai Lama did complete the reform process to a democratic government, including an elected National Assembly and Supreme Court, with an elected prime minister, but only after he departed Tibet and set it up for the Tibetans in exile.