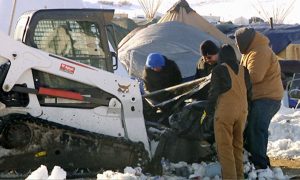 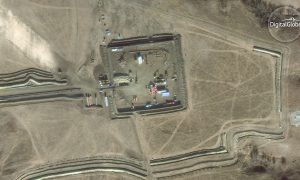 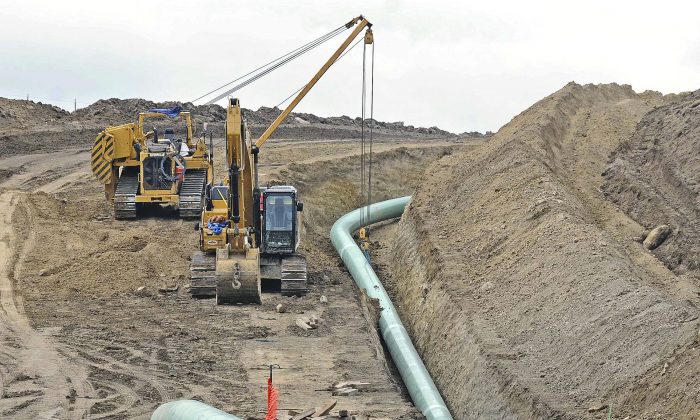 Heavy equipment at a site where sections of the Dakota Access Pipeline were being buried near the town of St. Anthony in Morton County, N.D., in a file photo. (Tom Stromme/The Bismarck Tribune via AP)
Economy

The U.S. Court of Appeals in the District of Columbia granted the Dakota Access Pipeline permission on July 14 to continue operating, temporarily setting aside a July 6 order from a lower court for the pipeline to be closed down and emptied while the U.S. government conducts an extensive environmental impact study.

The administrative stay allows the pipeline to continue to transport crude oil while the Appeals Court considers whether the pipeline should remain in operation or be shut down permanently. Environmental groups and Native American tribes in the region have questioned whether the U.S. Army Corps of Engineers violated federal law in granting a permit to Dakota Access LLC and Energy Transfer LP for an easement to route part of the pipeline deep beneath Lake Oahe, a reservoir on the Missouri River.

The July 6 intermediate victory for environmentalists and Native American tribes came after years of legal battles, with U.S. District Court Judge James Boasberg ordering that the underground oil pipeline should cease operations and be emptied of oil by Aug. 5.

In his ruling, Boasberg wrote that although he was mindful of the disruption the shutdown would cause the oil industry in the region, he determined that the gravity of the charges against the federal government’s handling of the easement “outweighs the negative effects of halting the oil flow.” The pipeline would have been shut down for approximately 13 months, the time the U.S. Army Corps of Engineers estimated it would need to produce an environmental impact statement.

An appointee of then-President Barack Obama, Boasberg said mistakes had been made by the Army Corps of Engineers in its adherence to the National Environmental Policy Act (NEPA). He stated in his ruling (pdf) that “given the seriousness of the Corps’ NEPA error, the impossibility of a simple fix, the fact that Dakota Access did assume much of its economic risk knowingly, and the potential harm each day the pipeline operates, the Court is forced to conclude that the flow of oil must cease.”

The Court of Appeals overturned that ruling on July 14, however, and the 1,172-mile pipeline can now continue to transport up to 570,000 barrels per day from North Dakota’s Bakken oilfield through South Dakota and Iowa to terminals in Illinois, connecting to pipelines that further the oil to refineries in the American Midwest and on the Gulf Coast.

Opposition to the Pipeline

The Dakota Access Pipeline had drawn widespread opposition and protests from Native American tribes and environmental activists. The Standing Rock Sioux Tribe brought a lawsuit against the federal government in 2016 after claiming that the pipeline traversed their ancestral lands. Spokespersons for the tribe said the community was worried that any leaks could pollute their lands and water.

“This pipeline should have never been built here,” said Standing Rock Sioux tribal chairman, Mike Faith, in a statement on the July 6 decision. “We told them that from the beginning.”

A statement from Energy Transfer said, “This pipeline is the safest, most environmentally responsible method for moving North Dakota’s crude oil to refining markets around the country.”

The company also noted that billions of dollars in tax and royalty revenue would be lost by tribal, state, and local governments from North and South Dakota to Iowa and Illinois. “Ironically, the counties along these rail lines will face increased environmental risks due to the increased amount of crude oil traveling by rail,” the company stated.

Dakota Access LLC stated that the company stood to lose up to $3.5 million each day if the line were idled, or some $1.4 billion if the line remained shut throughout 2021. Even draining the 1,172 mile-long pipeline would have taken up to three months, and would have cost the company around $27 million.