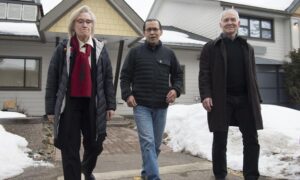 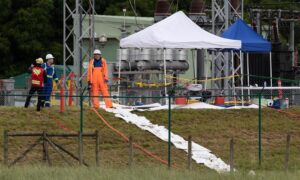 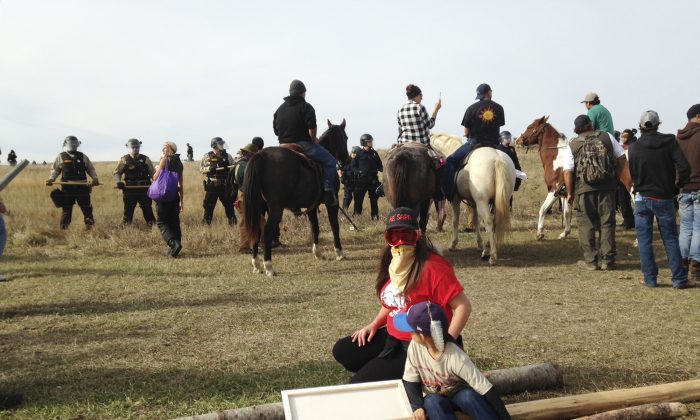 Dakota Access pipeline protesters stand in defiance of law enforcement officers who are trying to force them from a camp on private land in the path of pipeline construction near Cannon Ball, N.D., on Oct. 27, 2016. (James MacPherson/AP Photo)
Judiciary

Federal Judge Orders Dakota Access Pipeline to Be Shut Down

A federal judge on July 6 ordered the Dakota Access Pipeline to be shut down and emptied while the U.S. government conducts an in-depth environmental impact review.

U.S. District Court Judge James Boasberg ordered the underground oil pipeline to be emptied by Aug. 5, delivering a victory to Native American tribes after a years-long legal battle. The court had previously ruled that the U.S. Army Corps of Engineers had violated federal environmental law when it granted a permit for an easement to construct a segment of the 1,172-mile pipeline beneath Lake Oahe, a large reservoir behind a dam on the Missouri River.

The permit was also overturned in the July 6 decision.

Boasberg wrote that he was mindful of the disruption the shutdown would cause to the pipeline and the oil industry but determined that the gravity of the federal government’s deficiencies “outweighs the negative effects of halting the oil flow” for about 13 months, which is the amount of time the U.S. Army Corps of Engineers estimated an environmental impact statement would take.

“Given the seriousness of the Corps’ NEPA error, the impossibility of a simple fix, the fact that Dakota Access did assume much of its economic risk knowingly, and the potential harm each day the pipeline operates, the Court is forced to conclude that the flow of oil must cease,” Boasberg, an Obama appointee, wrote in his ruling (pdf).

The pipeline had drawn widespread opposition and months of protests from environmental activists, veterans, clergy, and members of at least 200 other tribes. The Standing Rock Sioux Tribe, which says the pipeline passes through its ancestral lands, brought a lawsuit against the federal government in 2016 in an attempt to block the construction. The tribe is worried that the construction and possible oil leaks would lead to the destruction of its sacred sites and pollute its land and water. Several other tribes joined Standing Rock in their lawsuit.

“Today is a historic day for the Standing Rock Sioux Tribe and the many people who have supported us in the fight against the pipeline,” the tribe’s chairman, Mike Faith, said in a statement. “This pipeline should have never been built here. We told them that from the beginning.”

Energy Transfer, the pipeline’s parent company, said they intend to file a motion to block the decision. If the stay is not granted, the company intends to appeal the decision in the circuit court.

“We believe that the ruling issued this morning from Judge Boasberg is not supported by the law or the facts of the case. Furthermore, we believe that Judge Boasberg has exceeded his authority in ordering the shutdown of the Dakota Access Pipeline, which has been safely operating for more than three years. We will be immediately pursuing all available legal and administrative processes and are confident that once the law and full record are fully considered Dakota Access Pipeline will not be shut down and that oil will continue to flow,” Lisa Coleman, a spokesperson for the company, said in a statement to The Epoch Times.

The pipeline owners and its supporters argue that shutting the pipeline down would have serious repercussions for the North Dakota oil industry. They say there is currently no viable alternative method to transport 570,000 barrels of crude oil that the Dakota Access Pipeline is able to carry each day, and that this would drive up prices of the oil.

They also say the shutdown would also have a “reverberating effect” on North Dakota’s economy, which heavily relies on oil and gas taxes.

Energy Transfer Partners previously disputed claims about the pipeline, saying that it doesn’t encroach or cross any land owned by the Standing Rock Sioux Tribe and doesn’t impact groundwater in any of the four states it passes through since it began operation in June 2017.

In 2017, Boasberg ordered the U.S. Army Corps of Engineers to redo an environmental review after he found that the agency didn’t adequately consider factors such as how an oil spill would impact the tribe’s fishing and hunting rights and whether the tribe would be disproportionately harmed by a spill.

The agency completed its environmental analysis but the tribe disagreed with its conclusions. This prompted the tribe to go back to court and ask the federal government to conduct an in-depth environmental analysis. The court granted the tribe’s request in a ruling in March, finding that the agency had failed to fully consider expert disagreement over the risk of an oil spill in the lake. Boasberg at the time also asked both parties to submit briefs on whether the pipeline should be shut down.

The ruling comes after the owners of a natural gas pipeline, Atlantic Coast Pipeline, announced they would cancel their project due to ongoing delays, costs, and litigation. That pipeline would have carried natural gas from West Virginia to North Carolina.

“This announcement reflects the increasing legal uncertainty that overhangs large-scale energy and industrial infrastructure development in the United States,” Thomas Farrell, chairman of Dominion Energy, said in a statement. “Until these issues are resolved, the ability to satisfy the country’s energy needs will be significantly challenged.”