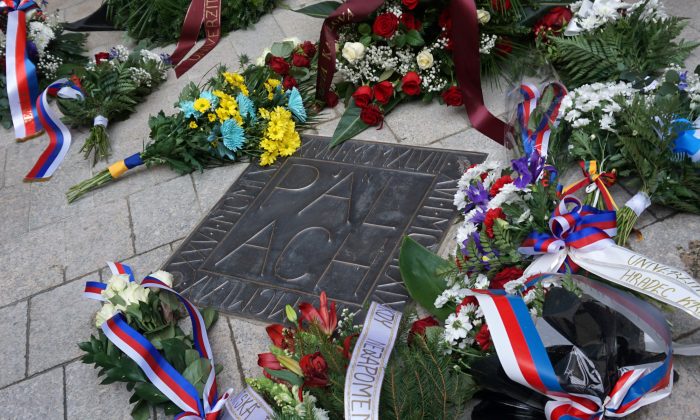 Flowers are placed next to a memorial plaque commemorating Jan Palach at Charles University in Prague, on Jan. 16, 2019. (Jiri Skacel/Reuters)
Europe

PRAGUE—Czechs marked the 50th anniversary of student Jan Palach setting himself on fire in central Prague on Jan. 16. The self-immolation was a desperate act aimed at lifting the apathy hanging over the country in the wake of the Soviet invasion that crushed the Prague Spring of 1968.

Having seen a period of reforms to Czechoslovakia’s Communist system snuffed out by the invasion five months earlier, and the widespread public demoralization that followed, the 20-year-old Palach decided to take action.

He went to Wenceslas Square on Jan. 16, 1969, poured gasoline over his head, and set himself on fire. Passersby smothered him with their coats, but the student of economics and philosophy died three days later of his burns.

Palach left a letter behind calling for the end of censorship and Soviet propaganda, and for a general strike.

“I marched back then with the students [after Palach’s death],” said Robert Gruen, 70, while visiting a commemorative open-air exhibition in Wenceslas Square. “Today I think a man’s life is too important to end it like that.”

Dozens of public events were held across the Czech Republic, including a concert alongside the exhibition in Wenceslas Square and the unveiling of a memorial plaque at Charles University, where Palach studied. Marches with lights were planned at several places for the evening.

Palach called himself “Torch No. 1” in his letter, giving the impression that he was a part of a larger group that in fact did not exist. But several others followed his example in Czechoslovakia and other eastern bloc countries.

“People must fight against the evil they feel equal to measure up to at that moment,” Palach said before he died in a hospital Jan. 19, 1969.