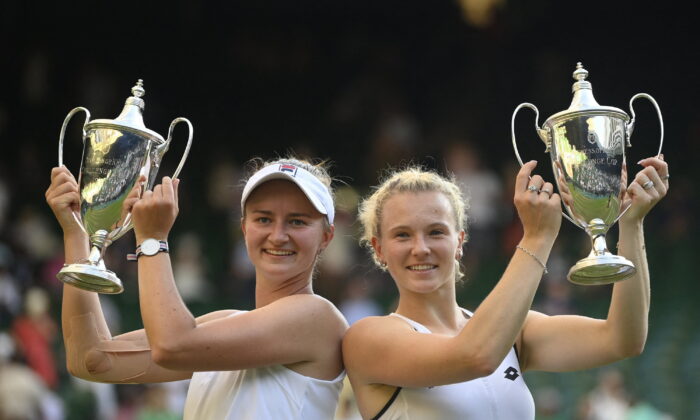 Czech Republic's Katerina Siniakova and Czech Republic's Barbora Krejcikova pose with the trophies after winning the women's doubles final against China's Zhang Shuai and Belgium's Elise Mertens during the Wimbledon Championships at the All England Lawn Tennis and Croquet Club in London on July 10, 2022. (Toby Melville/Reuters)
Tennis

The second seeds, who also won the event in 2018, dropped only one set en route to their fifth Grand Slam title and their second of the year after winning the Australian Open.

While the men’s doubles final on Saturday lasted over four hours, the women’s match was done and dusted in 67 minutes as the Czechs stamped their authority and denied Belgian Mertens back-to-back titles at the All England Club.

“Always playing Wimbledon final, I think it doesn’t really matter what category you play, you always get goose bumps when you enter the court,” Krejcikova told reporters.

“For us, we really like to play on a big court, so I think we really enjoyed the atmosphere. From the very first point we really, really wanted to win. I’m really proud of us, that we managed to do that and that we get another trophy.”

The Czech pair broke early to take a 3–0 lead in the opening set and did not look back as they wrapped it up in half an hour.

Although they were in a spot of bother when they were broken at 3–3 in the second, opening the door for Mertens and Zhang to make a comeback, they rallied to win the next three games for the loss of only one point to seal victory.

The two Czechs, who also won Olympic gold in Tokyo last year, have won 17 matches together at Wimbledon and Krejcikova said they had their eye on more doubles titles despite their singles commitments.

“For sure we have many goals. I think the main goals are the slams, really want to do well there,” she said.

“I think we just want to keep going, keep having fun, just try to be better player and better person every single day.”