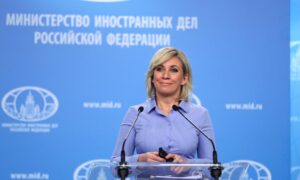 Czech President Vaclav Klaus won the opt-out of the Charter of Fundamental Rights. His signature will end the ratification process of the Lisbon Treaty, equivalent of the European Constitution. (Michal Cizek/AFP/Getty Images)
Europe

By Peter Sedik
Print
BRATISLAVA, Slovakia—The ratification of the Lisbon Treaty is one step closer to being realized after Czech President, Vaclav Klaus, agreed not to raise further demands for alteration on Oct. 30.

Czech was allowed to opt-out of the EU charter of fundamental rights, a legal document appended to the Lisbon Treaty which presented particular difficulties for the country.

The Czech president’s objections were related to concerns over the Benes decrees, a series of laws enacted during the Second World War. Changing the Benes decrees, which would be possible with a charter of fundamental rights, according to Klaus, may lead to property claims of ethnic Germans and Hungarians forcibly displaced from the former Czechoslovakia after the war.

The Czech president was the last of the 27 EU member states not to have agreed to sign the Lisbon Treaty, effectively blocking the ratification process. The country’s Euro-skeptic leader sees the document as a “fundamental shift towards greater centralization of decision-making and towards further weakening of the position of the member states,” containing “commitments that de facto mean giving up basic attributes of the sovereign state.”

The last obstacle is a group of Czech senators who challenged the Constitutional Court over potential infringement of Czech national sovereignty by the new European document.

The Lisbon Treaty is designed to streamline the decision making process in the European member states, while creating a new posts of EU President and Foreign Minister.

Informal talks about the future EU president also took place at the leaders’ summit. British Premier Gordon Brown supports his predecessor Tony Blair, but some leaders oppose the proposal because of his support for the Iraq war. Another gripe with Blair is Britain’s unwillingness to adopt the euro currency, which is currently used in 16 of 27 member states.

Klaus’s signature will conclude the eight-year struggle of the EU to ratify its own version of a constitution. The first attempt, dubbed “European Constitution,” failed in 2005 after French and Dutch voters stalled the ratification process. The watered-down Lisbon Treaty was again in jeopardy after the Ireland referendum in 2008. After Irish voters gave their “yes” in the second attempt last month, European leaders were then held up by the Czech president’s demands. After the EU summit and approval of Czech being able to opt-out of the rights charter, the process is believed to be wrapping up.