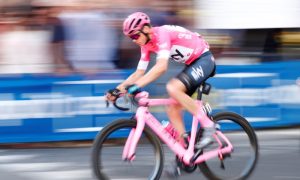 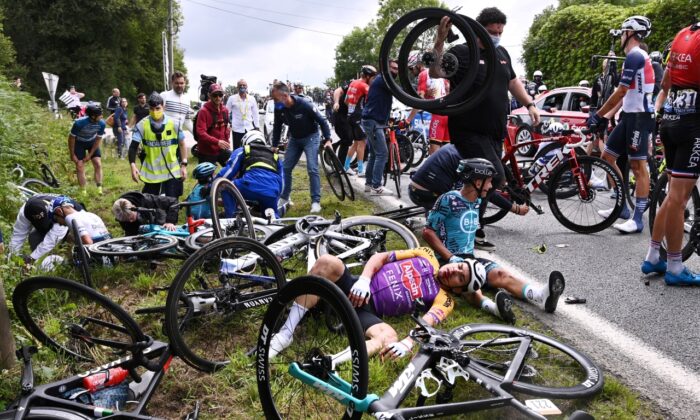 KTM rider Bryan Coquard of France reacts after a crash between Brest and Landerneau in France on June 26, 2021. (Anne-Christine Poujoulat/Reuters)
Sports

PERROS-GUIREC, France—French police on Sunday were still looking for the spectator who sent Tony Martin and, consequently, a large part of the Tour de France peloton, crashing in the opening stage amid calls for fans to behave on the side of the road.

On Saturday, Martin was sent tumbling when he rode straight into a cardboard sign being held out by a fan looking the other way at a television camera, creating chaos with 47 kilometres left of the stage.

“The Landerneau police are investigating and we haven’t heard back from them yet,” Tour deputy director Pierre-Yves Thouault told Reuters after organisers ASO filed a lawsuit against the unidentified spectator.

“We are going to repeat our calls for fans to behave time and again, through the police on the side of the road and our social network,” Thouault added.

“Most of the fans are peaceful but I want to stress that you come see the Tour, you don’t take selfies, you keep your kids close to you.”

Israel-Start Up Nation sports manager Rik Verbrugghe said that while riders enjoyed the support of fans, they created an extra stress in the peloton.

“It’s a good thing to have all those fans on the side of the road but it brings extra stress, extra danger,” he told reporters.

“We saw also the first crash was because of a fan. Most of the time the fans make it pretty dangerous because they make the road narrower. But it’s part of the game, that’s what makes cycling so exciting and so beautiful.”

Martin, one of dozens of riders to hit the ground on Saturday, urged the fans to be more respectful.

“Use your head or stay home!”