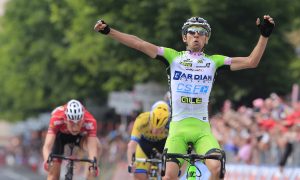 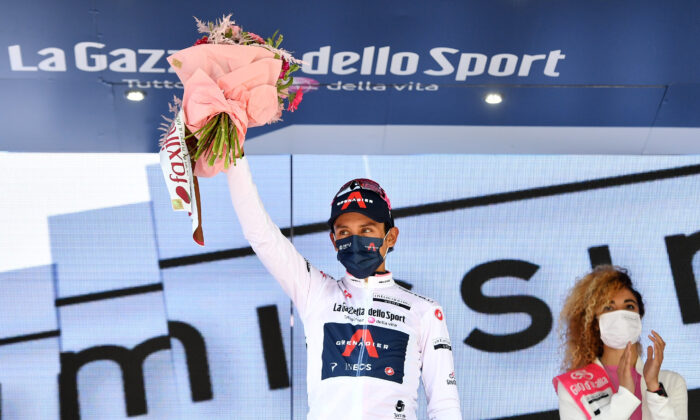 Ineos Grenadiers rider Egan Arley Bernal Gomez of Colombia celebrates wearing the maglia bianca on the podium after stage 17 in Canazei to Sega di Ala, Italy on May 26, 2021. (Jennifer Lorenzini/Reuters)
Cycling

SEGA DI ALA, Italy—Ireland’s Dan Martin completed a hat-trick of grand tour victories when he prevailed in the 17th stage of the Giro d’Italia as overall leader Egan Bernal showed his first sign of weakness on Wednesday.

Israel Start Up Nation rider Martin led from the breakaway in the 193-km mountain ride from Canazei to Sega di Ala, ahead of Portugal’s Joao Almeida (Deceuninck-Quick Step) and Briton Simon Yates (Team Bike Exchange), who came in second and third, 13 and 30 seconds off the pace respectively.

Yates attacked the group of top contenders with around 2.5 miles left in the nearly 7.5-mile ascent, at an average gradient of 9.8 percent, to Sega di Ala, and Bernal followed easily before suddenly coming almost to a halt a bit further up.

Paced by his Ineos Grenadiers team mate Dani Martinez of Colombia, Bernal recovered to limit his losses as he crossed the line in seventh place, 53 seconds behind Yates.

Martin had just held off Almeida to add to his 2013 and 2018 stage wins on the Tour de France and his 2020 stage victory on the Vuelta.

Overall, Maglia Rosa holder Bernal, who entered the race still wondering if the back problems that hampered his 2020 season were behind him, leads Italian Damiano Caruso by 2:21 while Yates climbs up to third, 3:23 behind the 2019 Tour de France champion.

“Today was a tough day for me, the last kilometers were really steep and I tried to follow Yates, but today he was stronger than me and I just tried to arrive at the finish with Caruso who is the closest in the GC, I didn’t want to take any risks,” said Bernal.

“Yates was impressive and I just did my best. I am happy because I didn’t lose too much time to Yates in today’s stage, today’s stage was perfect for him and then with Caruso who is second in GC I lost just a few meters.”

Other top contenders suffered on the day, with France’s Romain Bardet, Russian Alksandr Vlasov, Britain’s Hugh Carthy and Italy’s Giulio Ciccone losing ground as they were dropped early in the final ascent.

Ciccone wasted a fair amount of energy in a desperate chase after crashing on the descent from the Passo di San Valentino that also saw Belgian Remco Evenepoel go over the guard rail.

Evenepoel received treatment at the side of the road before getting back on his bike but abandoned the race in the evening, his Deceuninck-Quick Step team said.