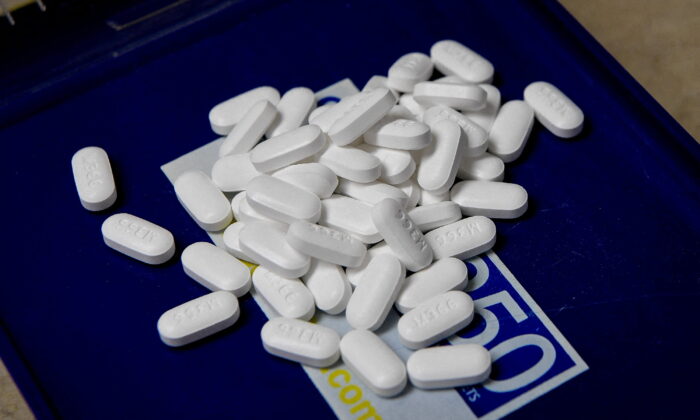 Tablets of the opioid-based Hydrocodone at a pharmacy in Portsmouth, Ohio, on June 21, 2017. (Bryan Woolston/Reuters)
Business & Markets

Pharmacy operators CVS, Walmart, and Walgreens must pay a combined $650.6 million to two Ohio counties to address the damage done by the opioid epidemic, a federal judge ruled Wednesday.

The order by U.S. District Judge Dan Polster in Cleveland marks the first time pharmacy chains have been ordered to pay money in an opioid lawsuit. It comes after a jury last November concluded that the companies helped create a public nuisance in Lake and Trumbull counties by over-supplying addictive pain pills, many of which found their way onto the black market.

“The news today means that we will soon have the long-awaited resources necessary to extend aid to properly address the harms caused by this devastating epidemic,” Trumbull County Commissioner Frank Fuda said in a statement.

The pharmacies, which have argued they cannot be liable for filling legal prescriptions from doctors, have said they would appeal that verdict.

Representatives of Walgreens and CVS both said Wednesday’s decision was not supported by the law and that they planned to appeal it. Walmart did not immediately respond to a request for comment.

Walgreens was also found liable last week in an opioid lawsuit brought by San Francisco, though the judge has not yet determined how much it must pay there.

Polster said the sum must be paid over 15 years, with the amount for the first two years, or $86.7 million, to be paid immediately. He also ordered the companies to implement new procedures to combat illegal diversion of opioids.

The U.S. opioid epidemic has caused more than 500,000 overdose deaths over two decades, according to government data. More than 3,300 lawsuits have been filed, mostly by local governments, accusing drugmakers, distributors and pharmacy chains of fueling the crisis.

Pharmacies have yet to reach any nationwide settlement, but Walgreens and CVS settled with Florida for $683 million and $484 million, respectively.

By Brendan Pierson and Dietrich Knauth