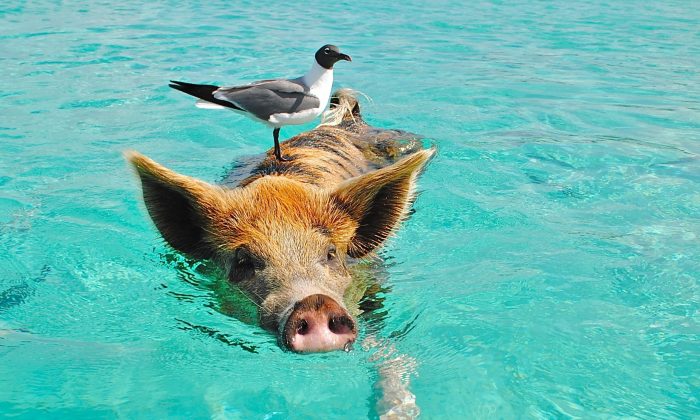 The Bahamas, the Commonwealth nation of hundreds of islands roughly the size of Connecticut and with population of just a bit over Anaheim, is known for its crystal waters and pristine beaches—and its swimming pigs.

It is unclear when the pigs first appeared on Exuma Island or where they come from. There’s talk about a (daring) escape from a shipwreck, or sailors releasing the swine on purpose. In all probability, there were no pigs on this tropical paradise before European settlers came, so their mere presence is the work of human. The intriguing feat of nature, however, is that this population of pigs developed a fine aptitude for swimming.

Some two dozen pigs and piglets cruise the pristine waters of Exuma, surviving on what the locals and stream of tourists give them. Yes, unlike squirrels in the Central Park, these animals you’re allowed to feed. And boy, do people take advantage?

“The rest of the tour is really the beauty of Exuma, but the swimming pigs are the drawing card,” said Capt. Raymond Lightbourn of Exuma Water Sports in the documentary.

That’s right. This is possibly one of the world’s most beautiful havens of nature, yet people are coming here to see pigs.

And who can blame them?