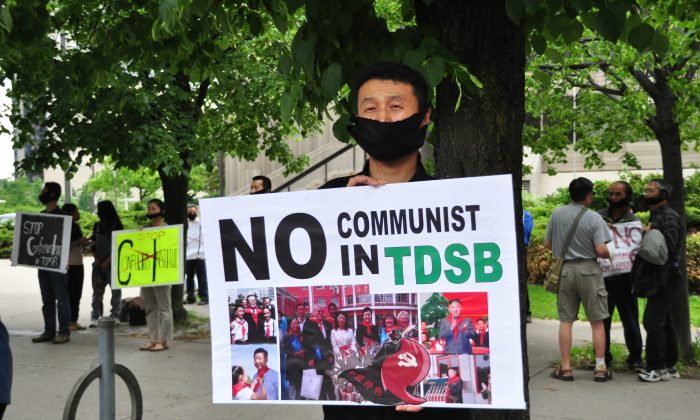 The American Association of University Professors has joined its Canadian counterpart in urging universities not to partner with the controversial Confucius Institutes, organizations funded by the Chinese regime often cited as tools to advance the regime’s “soft power.”

“Confucius Institutes function as an arm of the Chinese state and are allowed to ignore academic freedom,” the AAUP said in a statement.

“Specifically, North American universities permit Confucius Institutes to advance a state agenda in the recruitment and control of academic staff, in the choice of curriculum, and in the restriction of debate.”

Last year, the Canadian Association of University Teachers (CAUT), which represents 70,000 academic professionals, called on Canadian universities and colleges to also cut their ties with the controversial institutes, calling them “political arms” of the Chinese communist regime.

The AAUP’s statement comes as the Toronto District School Board (TDSB) debates whether to suspend its partnership with Confucius Institutes (CI) pending further investigation.

TDSB trustees had originally voted to sign a deal to work with the institute in Toronto, an initiative that had been in the works for a few years and championed by former TDSB chair Chris Bolton.

However, due to an outcry by some parents and human rights activists, a TDSB committee voted on June 11 to suspend the partnership pending further investigation.

The issue will be discussed again at a board meeting on June 18, at which time the trustees may vote on whether or not to sustain the suspension. The trustees will also discuss the board’s next move following the sudden resignation of Bolton.

The longtime trustee, who had said earlier he wouldn’t seek re-election this fall, resigned June 13, two days after the committee meeting that resulted in a vote to suspend the CI.

Bolton has also faced a number of controversies recently involving a charity he used to run. He did not respond to an interview request, but said in a statement that he resigned due to personal reasons.

Mike Lewis, a Toronto parent with a daughter in the public school system who has launched a campaign against CIs in Toronto, says he will continue to protest until the TDSB cuts its ties with the institute.

“Having the Chinese Communist Party influencing our children is absolutely unacceptable and we will persist until our ties with them are cut,” says Lewis.

The online campaign launched by Lewis, SayNoToCI.com, culminated in a protest attended by hundreds of parents and human rights activists outside the TDSB on June 11, compelling a TDSB committee, which at the same time was holding a meeting, to add the issue to their agenda. The committee voted to suspend the partnership with CIs pending further investigation.

Willowdale trustee Mari Rutka, who tabled the motion on June 11 to suspend CIs, told Epoch Times’ sister media NTD Television that she raised the motion after she and other trustees had received numerous emails and calls expressing concern about the partnership.

“As one of the many trustees who had heard these concerns, I think we wanted to just put a pause on it until we understood a little better some of the details of what the partnership agreement was actually going to entail,” Rutka said.

Rutka said concerns raised include issues surrounding CI’s hiring practices, allegations that CI’s spread propaganda, and the institute’s “close ties with the mainland Chinese government…and what other uses Confucius Institute might have or might be engaging in.”

Epoch Times reported in 2011 that Sonia Zhao, who came to Canada from China to work at the McMaster University CI, was required to sign a contract promising not to practice the spiritual discipline Falun Gong, which is repressed and persecuted in China.

McMaster eventually closed its CI early last year due to dissatisfaction with the institute’s hiring practices in China.

A stipulation in the requirements for CI teaching candidates wanting to come to the Toronto CI listed on the website of the Hunan City University in China says that “candidates will be assessed to ensure they meet political ideology requirements.”

Official documents by Hanban, the state agency in charge of CIs, indicate that all CI teachers abroad are under the direct control of local Chinese Embassies and consulates.

There are also many examples of Chinese Communist Party (CCP) propaganda found in textbooks used in CIs. One such textbook includes the song “I love Beijing Tiananmen,” whose lyrics contain lines such as “Our mighty leader Chairman Mao, Leading all of us forward.”

In many cases, students at CIs have been led to sing propaganda songs glorifying the CCP, such as the “Revolution Song” that Waterloo CI students sang at a ceremony, or “There Raises the Sun That Never Sets on the Prairie,” sung by a student at the University of Michigan CI last year, which praises Chairman Mao and the CCP.

There have also been other examples of CIs getting directly involved in exerting pressure to advance the Chinese regime’s interests.

In 2008, when Chinese paramilitary troops were sent to quash Tibetan protests, a University of Waterloo CI instructor rallied her students to condemn “anti-China” reports in the Western press, leading one Canadian television network to apologize for its reports.

The same year, Tel Aviv University shut down a student-led art exhibition depicting the oppression of Falun Gong in China out of fear of losing its CI and other perks supported by the Chinese regime. An Israeli judge later ruled that the university had violated the students’ freedom of expression

TDSB trustee Howard Goodman told NTD Television that he doesn’t know how the board could ensure CIs don’t expose students to pro-communist propaganda. He said he knows very little about Confucius Institutes, and that is why he wants the institute suspended until trustees are given more information.

“At the moment I fully support suspending CI until further notice and explicit approval by the board, but I always allow myself the privilege of changing my position as I get more information,” he said.

Trustee Shelly Laskin said in an email that she fully supports a letter written by former TDSB trustee and Chinese-Canadian community leader Tam Goossen for the Toronto Star.

“As the TDSB makes its final decision regarding a partnership with the Confucius Institute, it is important to remember the original intent of the International/Heritage Languages program: to bring students and their families from diverse backgrounds together through cultural and linguistic appreciation within the multicultural Canadian context,” Goossen wrote.

“I believe the TDSB has demonstrated its ability to implement this important program successfully without enlisting such controversial outside help.”

The Confucius Institute of Toronto did not respond to an interview request by press deadline.