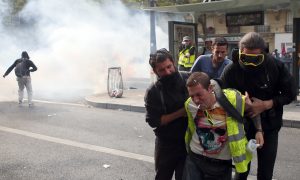 A waiter was shot and killed in a restaurant near Paris at about 9.15 p.m. on Friday, Aug. 16. The shooter was apparently a customer who got impatient waiting for a sandwich, according to The Local France.

The restaurant is located in the suburb of Noisy-le-Grand, east of Paris.

Attempts were made to revive the 28-year-old waiter who had been shot in the shoulder with a handgun.

A witness said the customer lost his temper because of his: “sandwich was not prepared fast enough.”

The police told the local news outlet that an investigation is underway and the suspect is still at large.

“It is sad,” said a 29-year-old woman. “It’s a quiet restaurant, without any problems. It just opened a few months ago.”

Locals told the Le Parisien that the restaurant had only opened three to four months ago.

“This restaurant has just opened three or four months ago,” a resident said. “There are three to look after them, two of them serving. We regularly order from them. They are very nice and seem to be big bosses.”

Other residents said that the neighborhood’s environment was to blame.

“Alcoholic” and “drugged” people are hanging around this area a lot more, according to other residents.

Fireball Explodes Across Roof of University in France

In tragedy-related news, a large fire has broken out on the rooftop of a university in the French city of Lyon.

Videos and photos posted on social media on Jan. 17 show thick black smoke billowing from the flaming building top before a massive fireball explodes with a bang across the top of the roof.

Below the exploding fireball that spews out a black mushroom cloud, stands a crowd of students, already evacuated from the building on the university campus in central-eastern France.

According to Reuters, police and university sources said that the explosion was caused by a gas bottle on the roof of the science library in La Doua campus in Villeurbanne.

Firemen are on the scene, and the explosion has now been brought under control.

The university evacuated nearby buildings and set up a 110-yard (100 Meters) perimeter after the fire broke out sometime around 9 a.m.

A tweet posted by the University at 10:20 a.m. local time said that the fire was under control, and that there were only 3 minor injuries. Other buildings, initially evacuated, were no longer affected, it said.

The university said that the fire on the Mendel building was due to the renovation work.