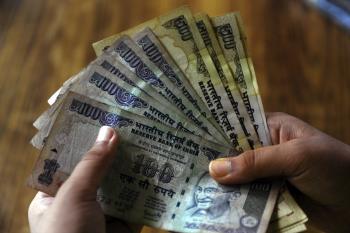 Indian rupee notes at a bank in Kolkata on July 15. India unveiled Thursday a symbol for its rupee currency that it hopes will become as globally recognized as signs for the dollar, the yen, the pound and the euro. (Deshakalan Chowdhury/Getty Images)
World

By Shahrzad Noorbaloochi
Print
The Indian rupee will now have its own currency symbol, reports the Indian public broadcaster Doordarshan.

The Union Cabinet jury decided on Thursday that the Indian rupee will be given a currency symbol that is a hybrid between the Roman letter "R" and the Devanagri "Ra."

Joining the likes of the American dollar, the British pound, the Japanese yen, and the euro, the rupee will be the fifth currency symbol with a distinct identity in the world.

D Uday Kumar, an Indian Institute of Technology post-graduate, designed the winning symbol, competing with 3,000 other submitted designs. His prize for designing the world’s fifth currency is Rs 250,000 (approximately US$5,342).

The government hopes to have the symbol widely distributed domestically in India within six months and internationally within 18 to 24 months, including its widespread presence on computer keyboards and software.

Information and Broadcasting Minister Ambika Soni, told reporters that the symbol will be printed on paper and coin money in the near future.