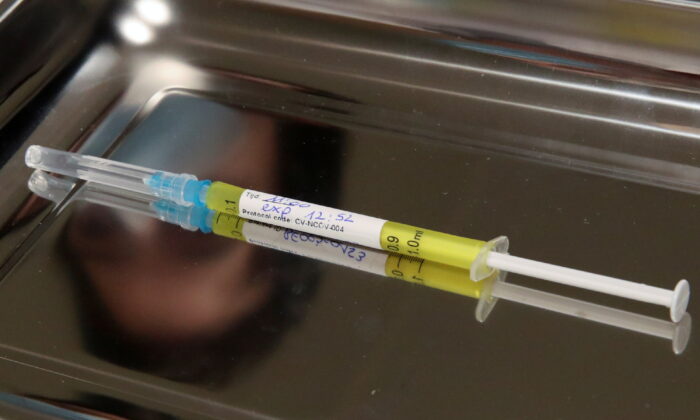 A dose of CureVac vaccine or a placebo during a study by the German biotech firm CureVac as part of a testing for a new vaccine against the coronavirus disease (COVID-19), in Brussels on March 2, 2021. (Yves Herman/Reuters)
Companies

BERLIN—CureVac has filed a patent lawsuit in Germany against BioNTech over its use of mRNA technology, marking one of the first known cases of a company going to court amid the fierce competition to develop a vaccine against the coronavirus.

The German-based biotech company is seeking “fair compensation” from BioNTech and two subsidiaries for infringement of its intellectual property rights, it said on Tuesday.

When asked in a media call, Chief Executive Franz-Werner Haas did not rule out further legal action against BioNTech partner Pfizer or mRNA vaccine maker Moderna.

BioNTech said its work was original. “We will vigorously defend it against all allegations of patent infringement,” BioNTech said in a statement.

CureVac said that its claim to intellectual property rights was based on more than two decades of work on mRNA technology, some of which was used by BioNTech and Pfizer for the development and sale of their Comirnaty coronavirus vaccine.

“Many years of our research have also contributed to the success of the mRNA vaccines and made that possible,” Haas told reporters. “From our point of view, it is self-evident to respect the associated property rights.”

Vaccines and drugs using mRNA technology instruct human cells to produce therapeutic proteins. Long regarded as an obscure technology with uncertain prospects, mRNA was brought to bear for the first time when used in vaccines during the pandemic.

Haas did not provide a value that CureVac, which posted a 2021 loss of 412 million euros ($423 million), would see as fair compensation.

BioNTech expects up to 17 billion euros ($17.5 billion) in vaccine revenue this year, down from last year’s 19 billion euros with the pandemic easing.

CureVac said that it was not seeking an injunction, nor intended to take legal action that would impede the production, sale or distribution of the vaccine.

At the height of the pandemic, it would not have occurred to CureVac to point out patent infringement, but now that there is better control over the pandemic, it believed it was the right time to do so, Haas said.

The court in Duesseldorf, where CureVac submitted its lawsuit, declined to comment.

Haas was coy about potential further legal action, indicating that first a basis was needed regarding CureVac’s fair share in product development and sales in Germany and how that would be appropriately valued.

Asked whether he would rule out legal action against Moderna, he said: “We are not ruling anything out. We are looking at it very carefully.”

The COVID-19 pandemic, which began in China, has killed more than 6.3 million people and spurred a race among pharmaceutical companies to be the first to develop a vaccine, with BioNTech and Pfizer coming to dominate the field in the Western world.

After failed efforts to bring a COVID-19 vaccine to market last year, CureVac intensified its work with partner GSK on improved versions of vaccine.

CureVac and GSK said in April that their second-generation vaccine candidate targeting two recent COVID-19 variants had been shown to be highly effective in pre-clinical studies on mice.