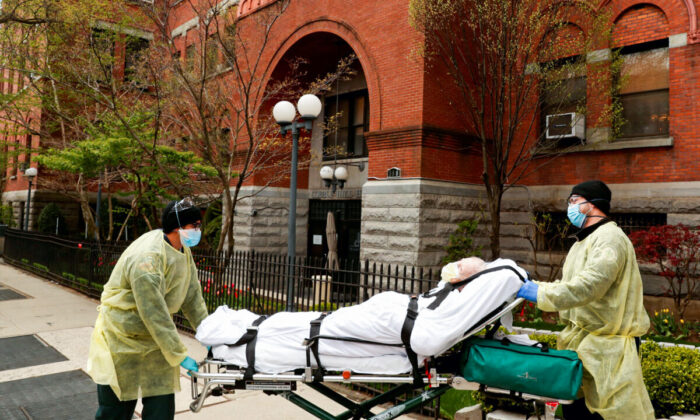 Emergency Medical Technicians (EMTs) wheel a man out of the Cobble Hill Health Center nursing home during an ongoing outbreak of COVID-19 in the Brooklyn borough of New York City on April 17, 2020. (Lucas Jackson/Reuters)
NY News

Former New York Gov. Andrew Cuomo’s administration undercounted COVID-19 deaths in nursing homes by more than 4,000 during the pandemic, according to an audit released on March 15 by the state comptroller.

The audit, released by New York State Comptroller Thomas P. DiNapoli, accuses the New York State Department of Health of having “misled the public” during the COVID-19 pandemic, and at certain points of having undercounted the number of nursing home deaths by more than 50 percent.

The audit states that while the lack of transparency could potentially have been due to the “poor quality data” that the health department was collecting early on during the outbreak, it was likely the result of a “deliberate decision” at certain periods during the pandemic.

As an example, from April 12, 2020 to Feb. 3, 2021, the Department frequently changed its basis for reporting coronavirus deaths in nursing homes. At one point, officials only reported resident deaths that occurred at the nursing home instead of reporting all deaths regardless of where they had occurred, such as in the hospital.

The department provided “virtually no explanation” to the public as to why they had changed the methodology for counting such deaths, according to the audit.

Overall, from a nearly 10-month period from April 2020 to February 2021, the department failed to account for a total of 4,100 lives that were lost to COVID-19, the state comptroller found.

Yet when questioned by auditors about the incorrect data, health department officials could not explain the discrepancies, the comptroller’s audit said.

Cuomo’s administration has come under fire for its lack of transparency, especially in regard to the number of COVID-19 deaths in the state. It has also faced heavy criticism for issuing a controversial order in March 2020 at the start of the pandemic that forced nursing homes to accept elderly people who had tested positive for COVID-19.

That was despite expert projections showing hospitalizations would reach as high as 110,000 in the state, about twice its hospital capacity. Critics say Cuomo’s decision prompted a rise in COVID-19 deaths in the state.

DiNapoli noted in the audit that New York had been battling with a persistent lack of funding for public health over the last decade, which in turn forced the Department of Health to operate “without critical information systems and staff that could have identified and helped limit the spread of COVID-19 at nursing homes.”

However, he pointed to further errors made by Cuomo’s administration, including the health department’s slow response to a federal directive to conduct surveys of nursing homes for infection control problems, assessing just 20 percent of facilities between March 23 and May 30, 2020, as opposed to over 90 percent as seen in some states.

“DOH imposed impediments on the audit, including delaying requested data, limiting auditors’ contact with program staff, not addressing auditors’ questions during meetings, and not providing supporting documentation,” the report states. “These are not routine actions by state agencies undergoing an Office of the State Comptroller audit and raise serious concerns about the control environment at DOH.”

Cuomo resigned in early August 2021 after a report commissioned by the state attorney general found that he had sexually harassed 11 women, an accusation that he continues to deny.

Gov. Kathy Hochul’s new administration took over on Aug. 24 and almost immediately New York added an additional 12,000 deaths due to COVID-19 than had previously been counted publicly by the state.

“Families have a right to know if their loved one’s COVID-19 death was counted, but many still don’t have answers from the state Department of Health,” DiNapoli said. “Our audit findings are extremely troubling. The public was misled by those at the highest level of state government through distortion and suppression of the facts when New Yorkers deserved the truth.”

DiNapoli also warned that the pandemic is still not over but said he was hopeful that the current administration would make the necessary changes to “improve accountability and protect lives.”

Attorney General Letitia James said DiNapoli’s audit “affirms the findings my office uncovered last year: the former governor and the DOH undercounted the number of nursing home deaths by as much as 50 percent.”

She also applauded DiNapoli’s team for bringing much-needed transparency to this critical issue.

The New York health department pushed back against the state comptroller’s findings, stating that “whatever criticisms may now be directed at the prior administration relating to issues of transparency, or the particular categories of information that were publicly disclosed, those ultimately were matters for the executive chamber of the prior administration and not department personnel.”

The Epoch Times has contacted representatives for the health department and Cuomo for comment.