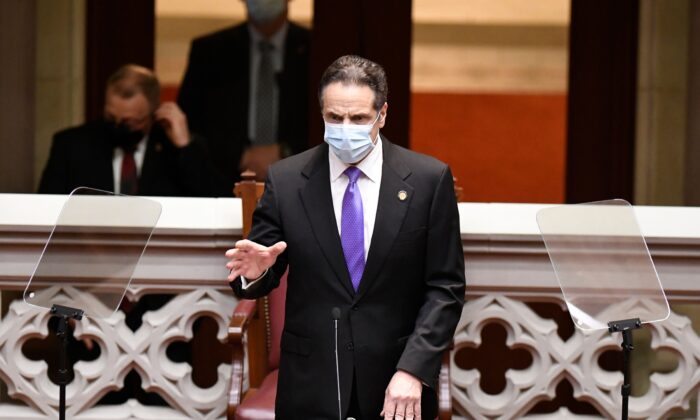 The Protect Our Courts Act, passed by the state Senate and Assembly in July, requires federal immigration agents to obtain a warrant signed by a judge before officials can arrest people on immigration violations inside state courthouses, or people going to or leaving a court proceeding.

An arrest with an administrative warrant, which is not signed by a judge, or with no warrant at all, would not be permitted.

“Unlike this federal government, New York has always protected our immigrant communities,” Cuomo said in a press release. “This legislation will ensure every New Yorker can have their day in court without fear of being unfairly targeted by ICE or other federal immigration authorities.”

ICE didn’t immediately respond to a request for comment by The Epoch Times.

Supporters of the Protect Our Courts Act said arrests at state courthouses had increased in recent years under the Trump administration, leading to fear among some that going to court proceedings on other matters could expose them to immigration enforcement.

U.S. Attorney General William Barr and acting DHS Secretary Chad Wolf previously said, “Instead of permitting the safe transfer of custody of criminal aliens in a secure environment, these dangerous state laws and policies force federal law enforcement officers to locate and arrest criminal aliens at-large within communities at potentially great peril to the officers and the public.”

It can be safer for ICE agents to make arrests at courthouses than by raiding people’s homes.

A Manhattan federal judge in June blocked federal immigration authorities from making civil arrests at New York state courthouses or arresting anyone going there for a proceeding, saying ICE’s tactics amounted to “disrupting and intimidating intrusions.”

According to a report from the Immigrant Defense Project, ICE made 173 arrests at state courthouses last year, in contrast to the 28 arrests made in 2016, before President Donald Trump took office.

“This new law is a powerful rebuke to the outgoing Trump administration and their immigration policies that have undermined our judicial system,” sponsor of the bill Sen. Brad Hoylman said in a statement. “After today, New York’s courts will no longer be hunting grounds for federal agents attempting to round up and initiate deportation proceedings against immigrants.”

Matthew Vadum and The Associated Press contributed to this report.