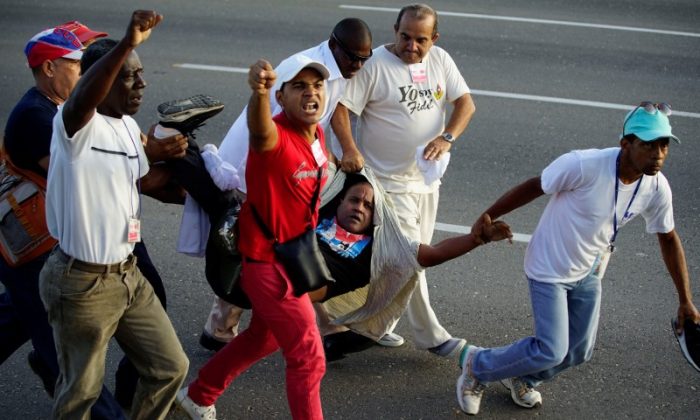 Security personnel take away a man during a May Day rally in Havana, Cuba on May 1, 2017. (REUTERS/Alexandre Meneghini)
International

HAVANA—A protester waving a U.S. flag briefly disrupted May Day celebrations in Havana, running out in front of hundreds of thousands of Cubans set to march across Revolution Square before being tackled and carried away.

Cuban leader Raul Castro, who has forged a detente with Cuba’s former Cold War foe the United States, watched the unusual security breach from a podium at the heavily orchestrated event.

Communist-ruled Cuba has marked International Workers’ Day since 1890, though massive rallies in Revolution Square took off in earnest after the 1959 revolution.

More than six million people took part in rallies and marches across the country on Monday, state-run Cuban television estimated.

“We support the civil-military union led by President Nicolas Maduro which fights to defend its sovereignty, independence and the country’s most genuine interests,” Guilarte said.

Venezuela has seen weeks of violent unrest that has killed at least 29 people as the opposition demands elections be held.

Opposition and government supporters marched in the OPEC nation in competing May Day rallies on Monday.