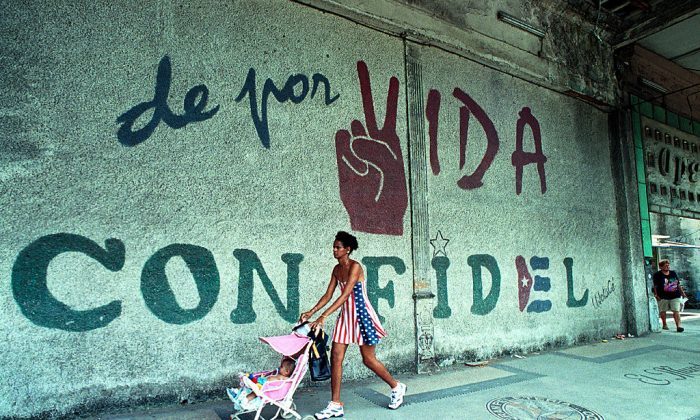 A woman dressed in the colors of the United States flag pushes her baby as they walk past a wall that reads, "A Lifetime with Fidel," June 11, 2001 in Havana, Cuba. (Jorge Rey/Getty Images)
Americas

WASHINGTON—It is easy to forget that despite the fall of communism in the Soviet Union in 1989 and its satellite states in eastern Europe, communist totalitarianism still holds sway in China, Laos, Vietnam, North Korea, and Cuba. To remind us of this fact and the over 100 million victims of communism, every June the Victims of Communism Memorial Foundation hosts a wreath laying ceremony to remember and commemorate the victims.

The Victims of Communism (VOC) Memorial Foundation is a Washington-based, non-profit educational and human rights organization. The Foundation takes the position that the “full extent of communism’s inhumanity to man is only dimly understood.” One of its main missions is to educate the public about communism and the enormous number of people who have been killed.

On June 10, Dr. Lee Edwards, who is chairman of the Foundation, presided over the ceremony, at which Professor Paul Goble, advisor, researcher, writer and specialist on ethnic and religious questions in Eurasia, received the Truman-Reagan Medal of Freedom. The latter is awarded to individuals who have made a life commitment to opposing communism and tyranny.

Lee invoked the French philosopher Andrew Gluckman who said, it was the duty of communicators, “to listen carefully to the words of the powerful, to be watchful of them, to forewarn of their danger, and to proclaim the dire implications or the evil they might invoke.” To listen carefully, to be watchful, to forewarn and to proclaim, that has been Paul Goble’s lifelong mission as a professor here in America and abroad.

“No political or economic system has claimed as many lives as communism,” Dr. Goble said in his remarks upon receiving the award.

No political or economic system has claimed as many lives as communism.
— Dr. Paul A. Goble, 2016 recipient of the Truman-Reagan Medal of Freedom

The location of the commemoration was outdoors at the intersection of Massachusetts Avenue and New Jersey Avenue, NW in Washington, D.C., where a bronze replica of the “The Goddess of Democracy,” created by Chinese students at Tiananmen Square, Beijing, in 1989, stands. The Victims of Communism Memorial, authorized by an act of Congress, was signed into law by President Bill Clinton.

For this year’s commemoration, Cuba was a special focus with a panel discussion on the day before the commemoration ceremony at the Foundation’s headquarters, which is a few blocks away from the memorial site.

Executive Director of the Foundation Marion Smith did not hide his disappointment in the Obama administration’s policy to restore diplomatic relations with communist Cuba last year. As he introduced the panel, he said that contrary to some people’s assumptions, the realities in Cuba did not change. In an opinion last August appearing in the Washington Post, Smith said:

Whatever one may think of the merits of the shift in U.S. policy, there is much about the communist Cuba that the public is unaware, especially the government’s brutality toward the Cuban people. These troubles are not often reported in the mass media, but reporting these is in keeping with the purpose of this commemoration.

Sirley Ávila León, from the village of Limones in the municipality of Colombia, Las Tunas, was elected in June 2005 to the official legislative body in Cuba, which supposedly governs the country, but in fact, is controlled by the Cuban Communist Party, she said. She tried to work in the interest of the poor farmers, whom she represented, but found the party was corrupt and unsympathetic to their plight.

The three primary schools in her district were demolished due to a government hydraulic project to construct a reservoir; it left some of the people destitute. The children had to walk more than 9 kilometers (5.5 miles) on a difficult path to reach the nearest school. With the support of her constituents and by pressuring the local government, she was able to get one school constructed in 2007.

“The provincial leader never forgave me for its construction,” she said, speaking in Spanish.

In a meeting with the other delegates, “I was accused by its president of being a leader,” she said. “[The president] said that my conduct would have to be analyzed at the provincial seat of the Communist Party of Cuba.”

After three years, the government closed the school, without regard that the road to the next nearest school was impassable, the long distance, and the hardship it brought to people who are poor. When she and parents complained, the government threatened to take the children away and house them in a school for disabled children if they refused to send them to their assigned school.

She was also determined to represent her community on other issues, but after three terms, her district was eliminated and she was eventually forced out of office.

“As the regime began campaigns against me, the people’s confidence in me grew,” she said via her translator.

“I was unaware of the lack of rights and the dictatorship that exists in Cuba, a dictatorship that is capable of anything in order to keep itself in power and whose claim that power originates in the people is a constant lie,” Ávila said,

She began to speak up against the injustice on the radio and she collaborated with government opposition groups.

I was accused by its president of being a leader.
— Sirley Ávila León, civil and human rights activist

One weekend while she was away, her home was vandalized, her well was poisoned, and all her animals were killed. She received many death threats. She was alerted by a friend (who was later murdered) “that the political police had offered highly dangerous common criminals rewards for murdering me.”

On May 24, 2015, she was attacked in her home with a machete by someone she identified by name, who was sent by state security to kill her, she said. Her shoulder, collarbone, right arm and both knees were slashed and her left hand was severed. She must now use a wheelchair and her left hand is a stump. She could get no help from police or the Cuban government, which enjoys impunity. She is currently in the United States for medical treatment and said she intends to return to Cuba after her recovery.

Sirley Ávila León received the VOC Human Rights Award on the day of the evening that she spoke, and she was introduced and praised the next morning at the wreath-laying ceremony.

Cuba Democracy Advocates Executive Director Mauricio Claver-Carone spoke of the danger of forgetting. “One hundred million victims of communism, yet you don’t hear about it,” he said. This isn’t history like the Armenian Genocide, but happening today.

Cuban Democratic Directorate International Secretary John Suarez said that more than 70,000 Cubans migrated this year to the United States, which “coincided with efforts to normalize relations with the dictatorship.”

In a Huffington Post article, Claver-Carone wrote that the number of Cubans entering the United States in 2015—about 51,000—was nearly double that of 2014. With already 70,000 this year, the number of Cubans fleeing is escalating. Some Cubans may be worried that their special status as Cuban exiles with rights to asylum may vanish soon with the new relationship between the United States and the Castro regime.

Saurez noted that the enhanced migration also happened during President Carter’s (1979-1980) and President Clinton’s (1994-1995) normalization efforts, and now it is repeating in the Obama administration.

“The dictatorship wants to export those people who are disaffected,” Saurez said.

Saurez also observed that during these efforts of détente with the Castro regime, the “worsening of human rights in the country” becomes “a common pattern.”

This year, Claver-Carone, who lobbies the Congress for his organization, said there have been over 6,000 political arrests, which “broke every record in a decade.” Last year, there were 8,616, he wrote in the Huffington Post article cited above. By comparison, in 2010, there were just 2,074 arrests and 4,123 in 2011.

Claver-Carone also said that over 250 churches have been demolished this year, he said.

Julio Shiling, political scientist, writer, lecturer and director of Patria de Marti, a political forum and digital publishing firm, also viewed the current efforts by the Obama administration as in no way furthering democratization and human rights in Cuba.

“That’s why the [U.S.] détente with the Castro regime is utterly meaningless if the purpose is democracy,” he said.

That’s why the [U.S.] détente with the Castro regime is utterly meaningless if the purpose is democracy.
— Julio Shiling, director, Patria de Marti

The entire communist system must be dismantled in order to transition to democracy, he said. Impunity cannot be tolerated as it is in communist Cuba, as exemplified in the case of the human rights award winner, Ávila.

Shiling touched on the role Cuban communism has played internationally.

“You cannot speak today about Venezuela, about Nicaragua, about Ecuador, about Bolivia, about Brazil without understanding the part that Cuban communism played. Venezuela is a Cuban colony,” he said.

Saurez mentioned Cuba’s role in Africa in the 1970s and 1980s, particularly Ethiopia. He said over one million people died in a famine that was “facilitated by Cuban troops.”